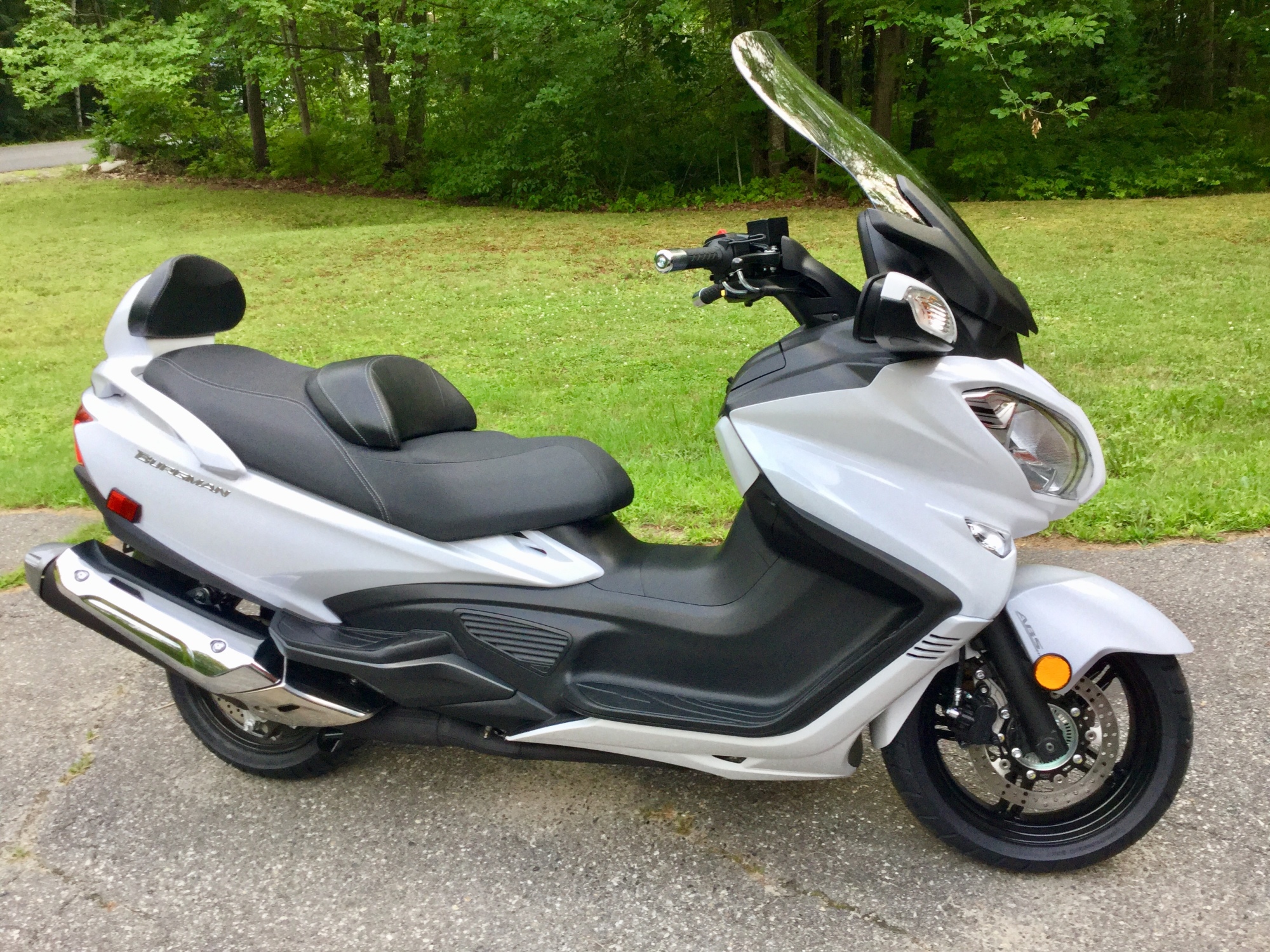 This is the 2018 Suzuki Burgman 650 Executive.  It is a remarkably different experience than the Vespa 300, so much so that it is difficult to know where to begin to describe it.  But it is unquestionably the right answer to my commuting situation, and, at least for this first 200 miles, the perfect motorbike for me — and I am sure that it will continue to be so as long as it proves reliable.

To begin with, why the Suzuki and not something else?  You may recall that I chose to trade in the Vespa because its handling became quite jittery at highway speeds, and because in five years it had gone through three drive belts and there are precious few dealers around (only one in Maine now) to fix it when it breaks.  So, in considering a replacement for it, if I wanted to drive a motorcycle I would have dozens of models from which to choose (as my pal Steve is fond of reminding me!) — but I DON’T want to drive a motorcycle; I don’t want to learn to shift, and I don’t want to give up the storage and weather protection that only a scooter can offer.  So that means that there were maybe five options in the engine size range to give me enough power for safe interstate travel (400cc or bigger): find an old Honda Silver Wing (but Honda stopped manufacturing them in 2014), buy a BMW C650gt (but there are few dealers, the engine is actually made by the Taiwanese company Kymco, and it’s REALLY tall), buy an actual Kymco (again, few dealers), buy an Aprilia 850 (but who needs to go that fast, and again, it’s a Piaggio product like the Vespa, so no dealers) — or buy a Burgman.

So, for the combination of a nationwide dealer network and a proven product (the Burgman has been in production since the early 2000’s), the Suzuki was really the only choice for me.  And, while Suzuki offers the Burgman in three sizes (200cc, 400cc, or 650cc), because I wanted the heated grips and seat so I could ride from April to November, the only Burgman offering those features was the 650. 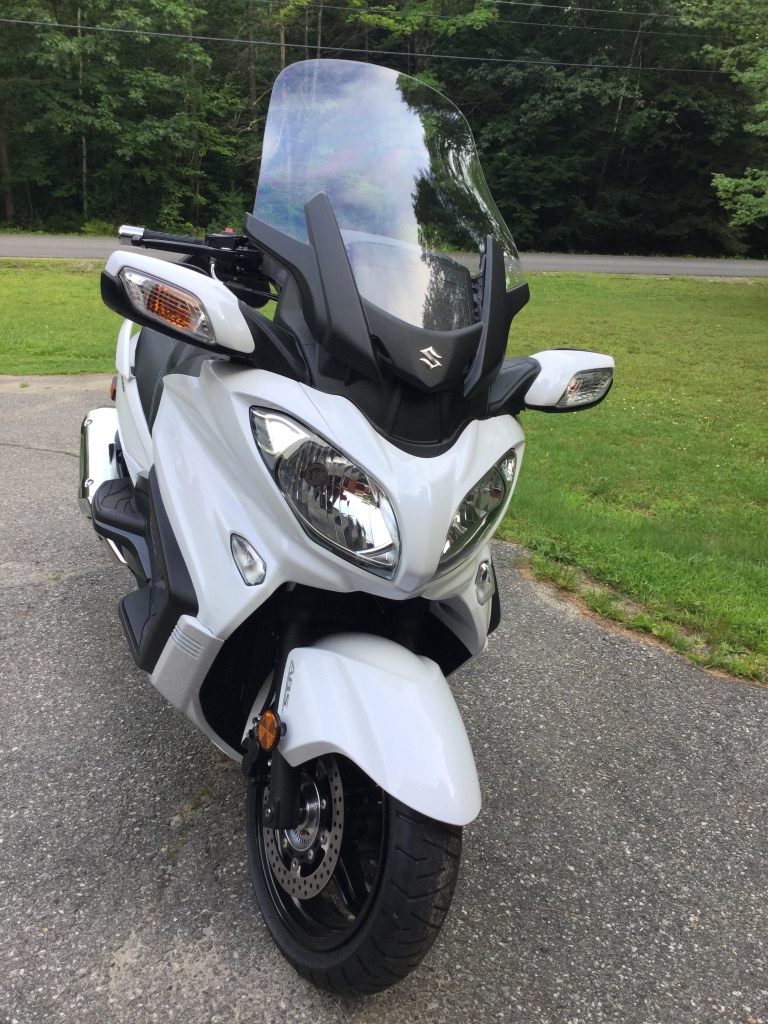 So I went from the classic Italian styling of the Vespa to the modern, motorcycle-derived (the Burgman shares technology with the Hayabusa, Suzuki’s premier sport bike) Burgman.  And what did I get in the bargain?

For one, I got a parallel twin engine as opposed to the single cylinder of the Vespa.  I will readily admit that, until now, the Vespa has been the only motorbike I have ridden (if you don’t count the beater Kawasaki 250 I rode in the MSF Basic Rider course) — but this Suzuki just pulls and pulls and pulls.  The Vespa got to 60MPH pretty well, but for anything faster, twist it wide open and don’t hold your breath, because it’ll be another 30 seconds getting to 70MPH — and then, there’s nothing left.  But with this Burgman, twist the throttle and it just doesn’t stop accelerating; it reaches 60MPH in no time at all, and I got it to 80MPH before I realized that I probably shouldn’t do that during the break-in period.  But I completely agree with the online reviewers who say that this bike can cruise at 80MPH all day long, and the advertised top speed of 110MPH seems perfectly reasonable.  In short, this is a bike with power to spare on the interstate or anywhere else.  And it’s heavy enough (almost twice the weight of the Vespa, at 611 pounds) that nothing rattles it — not potholes, not wind gusts, not even the blasts of semi-trailer trucks speeding by.

I also got a ton more onboard storage.  The underseat compartment holds two full-faced helmets, and there are two spacious cubbies along with a big locking glovebox on the dash.  I had filled the Vespa to its limit with extra gloves, accessories, etc. – but when I moved all that stuff to the Suzuki, it was only half full!  And — the Burgman gives me a light under the seat so I can see my stuff in the dark!

That really is one of the impressive attributes of this bike, the extensive comfort features.  In addition to the heated seats and handgrips (I had to buy aftermarket heated grips for the Vespa, three times, as I got only one year of service out of each — I finally gave up on them), this bike has a power windshield (too hot? Lower it! Too cold? Raise it higher!) and power mirrors, which fold into the body of the bike to give it a narrower profile when parked or lane-splitting.  And the lumbar support on the seat cushion is adjustable, allowing for the perfect fit!  The Vespa had an annoying “step” built into the seat to separate driver from passenger, and it was just a bit too close to the dash for me, a real pain in the @$$ on long trips.  The dashboard gives me a clock, a thermometer, a tachometer, left-right blinker lights and two trip-meters (along with a speedometer, gas gauge and temperature gauge, of course); the Vespa offered only the last three and a clock. And the Burgman also gives me parking lights and emergency flashers!

Honestly, riding the Burgman is a lot like riding a car.  You are planted on a wide, comfortable (heated if you want!) seat with an automotive-style dashboard in front of you, and the leg shield and windshield are big enough that you are completely insulated from bugs and wind blast.  And the bike is so heavy that it is completely imperturbable; it just cruises quietly and comfortably along. 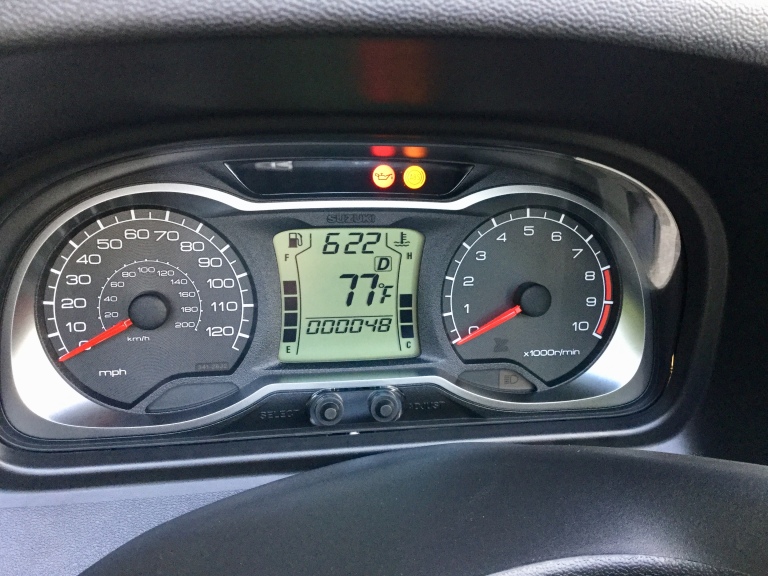 So we will see how it does for the long term.  Do I miss the Vespa? Well, I did enjoy the iconic styling and the inevitable interest it generated in passersby.  But, as my auto mechanic Tony wisely proferred one day, “people are to love; cars are to drive”. And so, by extension, the same with motorbikes.  I did love the Vespa — but less so the second time it left me by the side of the road, particularly since I had been so compulsive about maintaining it.  And I do love this Burgman!  I rode it to work today, 35 miles one way along the route which had so often left me windblasted and tense on the Vespa — and it was effortless, despite the 25MPH wind gusts and the routine buffeting of passing trucks.  So, it seems I chose wisely, as this bike has both the weight and the power to easily handle the commute which pushed the Vespa to its limits. 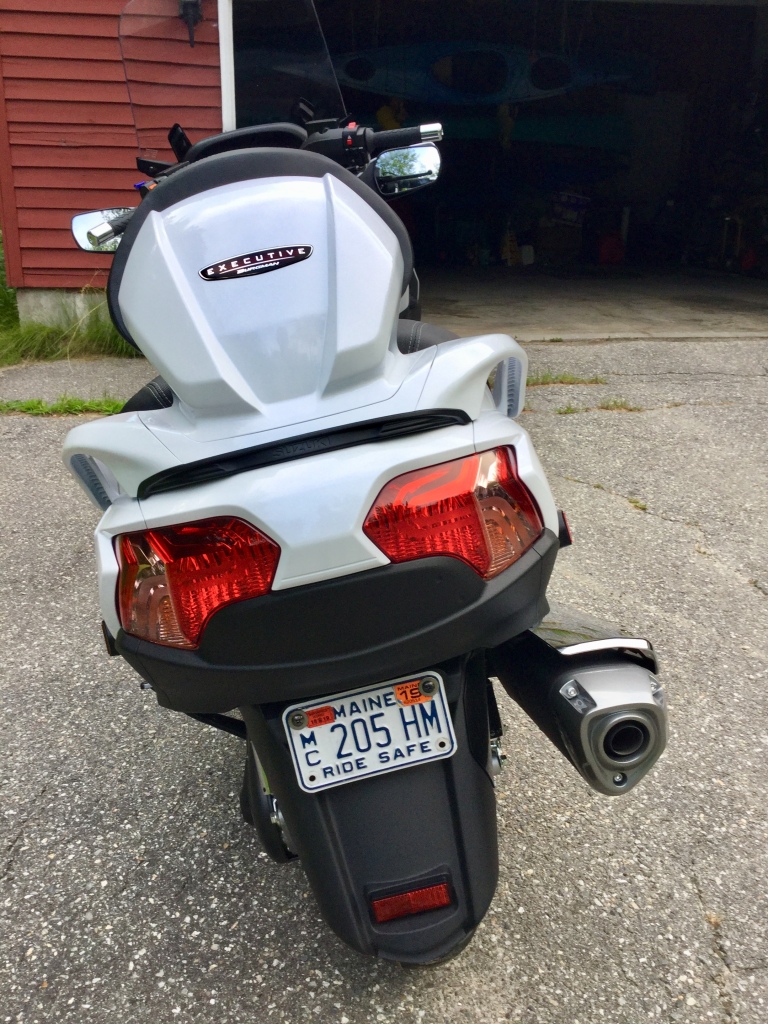 In summary, then, I am so beyond grateful to have this wonderful bike, exactly what I need to do the trips and commuting that I do.  And when the topbox arrives (it will replace the passenger backrest, marked “executive”, in the photo above), I will be able to carry everything I need to work, AND store my jacket and helmet in the bike when I get there!

So, be looking for some Burgman photos in the months to come!  We are planning some trips again and are excited about continuing our exploration of Maine and the northeast on two wheels!  Thanks so much for following along!

Most people who would follow this site already know as much about me as they care to know; but for those who stumbled onto this blog, since 2013 I have ridden a Vespa 300 GTSie Super, and now a Suzuki Burgman 650, around the northeastern U.S. and maritime Canada. The purpose of this blog is to share those trips with interested family and friends. View all posts by John Neal

3 thoughts on “Something New”