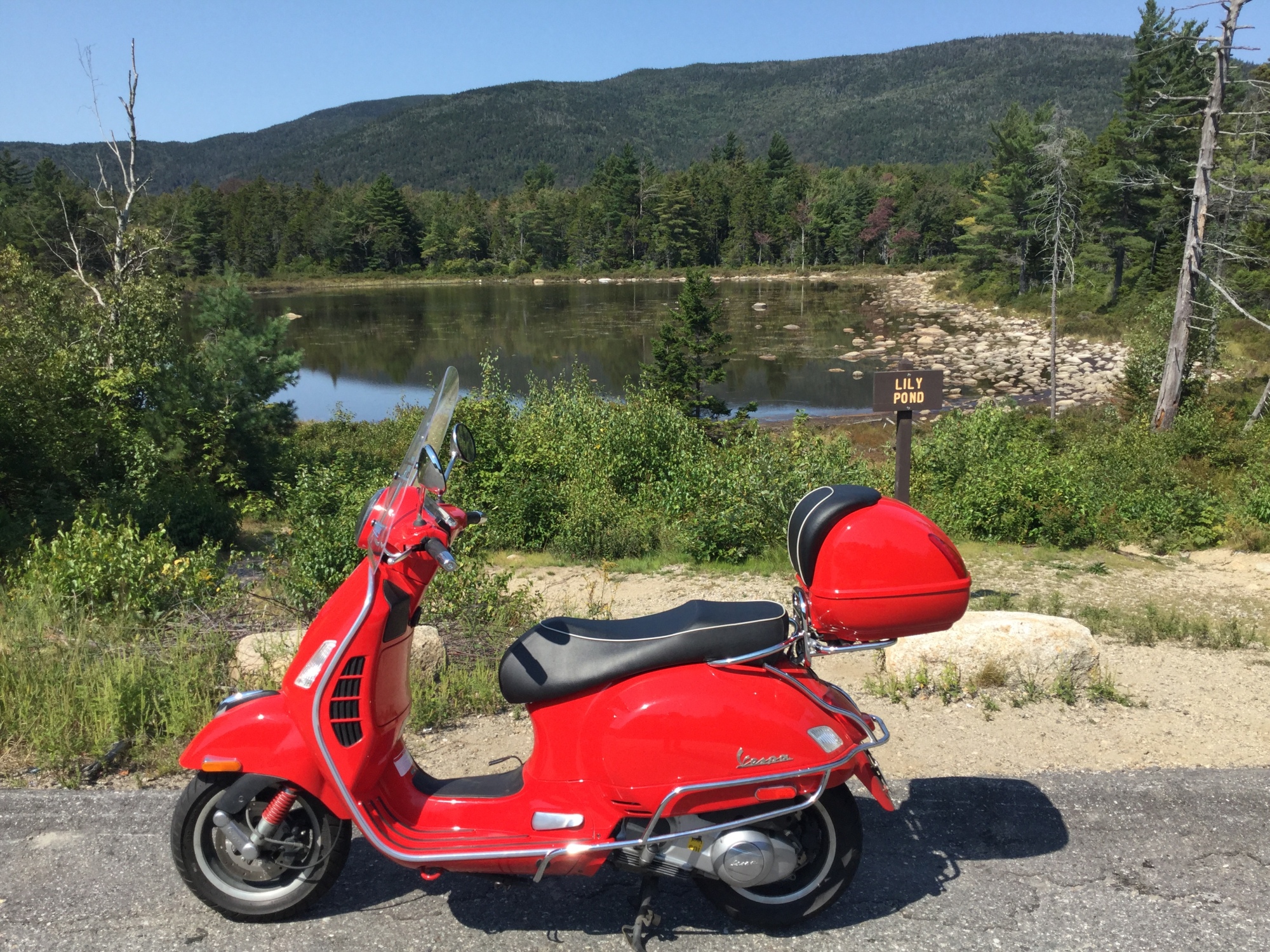 Five years ago, when I first seriously considered buying a Vespa, I scoured the internet for information on owning one, finding one excellent Vespa blog (Steve Williams’ “Scooter In The Sticks”), and a few videos posted by owners and motorcycle magazines on YouTube.  Consequently, now that my own Vespa ownership experience is coming to an end, I thought it might be helpful to someone looking for information, as was I back then, to try to sum up what it was like to own and ride this scooter.  Therefore, if you visit this blog for ride stories, this post will disappoint you; sorry about that, but I would nevertheless like to try to help out a newbie at this point, in the way that I appreciated finding whatever information I could find, five years ago.

So — the Vespa GTS300ie Super is, to my mind, the smallest of the so-called “maxi-scooters”, and thus constitutes an outstanding first motorbike for someone just getting into powered two-wheeled transport.  Because it is a scooter, the complications, distractions (and therefore, dangers) of shifting are eliminated — you just twist the throttle and go.  And because it IS a big scooter as scooters go, you have the ability to tour (although just barely, since it becomes very jittery above 60MPH).  But it IS freeway-legal, which means that everything you can do on a motorbike, you can do on a Vespa.  Moreover, the cargo capacity of a scooter is infinitely greater than that of a motorcycle, so touring is comfortable and easy.  My Vespa has been all over southern Maine, Atlantic Canada, northern New England and as far west as the St. Lawrence Seaway in western New York; yet it is also unsurpassed as an urban “errand” vehicle, because its small size enables you to park it just about anywhere and the cargo capacity allows transport of up to seven grocery bags.  And it has more than enough power to rocket away from stop lights and leave traffic in its wake. Overall, then, the Vespa 300 is an eminently practical and useful vehicle to own.

One should also be aware that this is an expensive scooter to own.  It is extremely well-made and the engine has run flawlessly for my entire ownership experience. However, the comparable Honda Forza 300cc scooter sells for just over half the price of the Vespa, and Robin’s Honda PCX150 has been infinitely more reliable overall than the Vespa.  In fact, maintenance costs on the Vespa 300 have averaged almost exactly $1000/year for the last five years, including seven new tires and two new drive belts, along with the routine service required, much more than the Honda (which, in fairness, has half the miles on it).  This is my first bike, and so my only experience in this regard, but that seems like a lot of money to me, just to keep the thing running safely.

Now it could be argued that those maintenance costs are artificially higher due to the unusual sequence of events that began with a rock stuck in the rear brake and led to two breakdowns and two new drive belts.  But why would a rock stick in the rear brake in the first place?  Is this a design flaw?  The new Vespas now have anti-lock brakes, which suggests that the brakes have been re-designed since mine were built in 2013, so maybe that issue is resolved.

But I was compulsive enough to record every expenditure I ever made on this Vespa, beginning with the purchase price and including every tire, every service, and every tank of gas.  Over five years and 31,663 miles, I spent per mile:

Add this up and I have spent about 43 cents per mile on this bike.  Does that seem like a lot?

And what did I get for my 43 cents a mile?  Well, I calculate I saved about $2500 in gasoline compared to what those 31,663 miles would have cost me in my Subaru Outback SUV.  And there’s no way to know how much additional service and money I saved on the Outback because I ran the Vespa instead.

But most importantly, as I explained in more detail in an earlier post, I got to go places and see things that I never would have bothered to do if I only had a car by which to do it; lovely and interesting places, but probably not spectacular enough to justify a two-hour car ride.  And I figure Robin and I scored a number of adventure points by visiting cool places (see earlier blog entries) on two wheels.  And what’s that worth in dollars and cents??

There is also undeniable cachet in riding a Vespa.  It is a rare outing which does not see some stranger approaching me to ask about the bike, how fast does it go (80MPH if you have a death wish), what kind of mileage does it get (69MPG in my experience), etc.?  Vespas are iconic enough to be ensconced in museums, one of the most successful designs of the twentieth century, and people seem to find them fascinating. 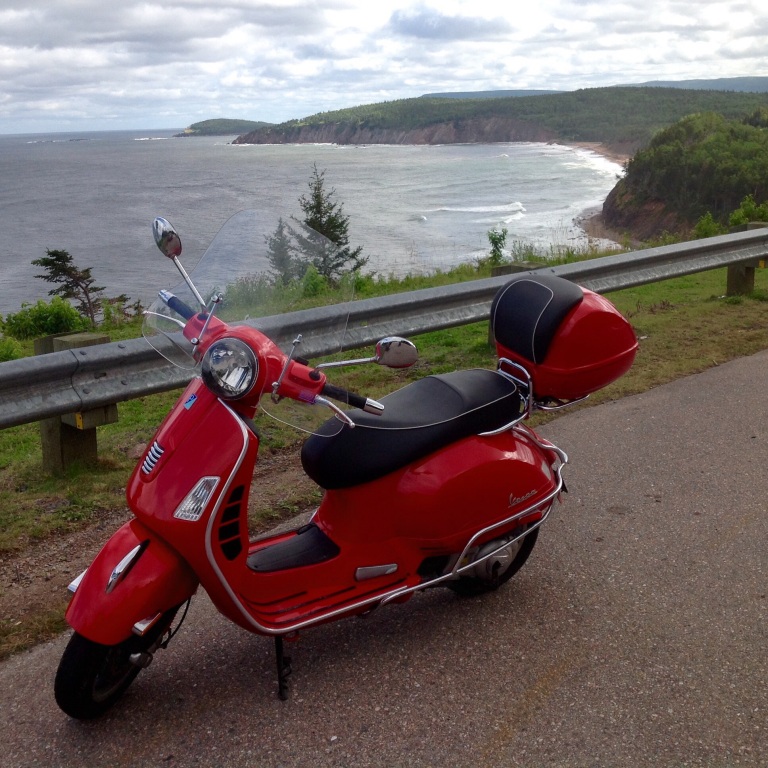 So, if all the above is true, why am I trading mine in on another brand?  Two reasons:  1) I need to go faster than 65MPH sometimes on my way to work, and the bike is just too small to do so comfortably, and 2) (the real deal-breaker) the dealer support is abysmal.

I do not wish by the above statement to cast aspersions on Trisports, which has done a decent job on the bike and even spent extra $$ to send a drive belt to Canada last summer on my behalf.  The problem is, Trisports is the only Vespa dealer in Maine.  There is one dealer in New Hampshire, one in Nova Scotia, a couple in Quebec, and two in Massachusetts.  My point is that if you do break down on the road, there is nobody around to help you.  Maybe if you live closer to a major American city, the odds are better, I don’t know.  But on the other hand, if you buy a Yamaha, or a Honda, or a Suzuki, or even (to a lesser extent) a BMW, you will have no problem finding service anywhere in the northeast or Atlantic Canada.  Moreover, Vespa does not consider me to be their customer; they consider the dealers to be their customers.  I am not going to get customer support from Vespa.  And get this!  The entire Vespa factory SHUTS DOWN for vacation the entire month of August!!  Need a part?  Good luck!

That’s what I mean by abysmal dealer support.  And consider this:  have you ever seen a Vespa ad on TV?  In any magazine?  I haven’t.  Vespa just does not support the North American market, which I think is extremely short-sighted as they do have a really excellent product and there are plenty of people here with the money to buy one. 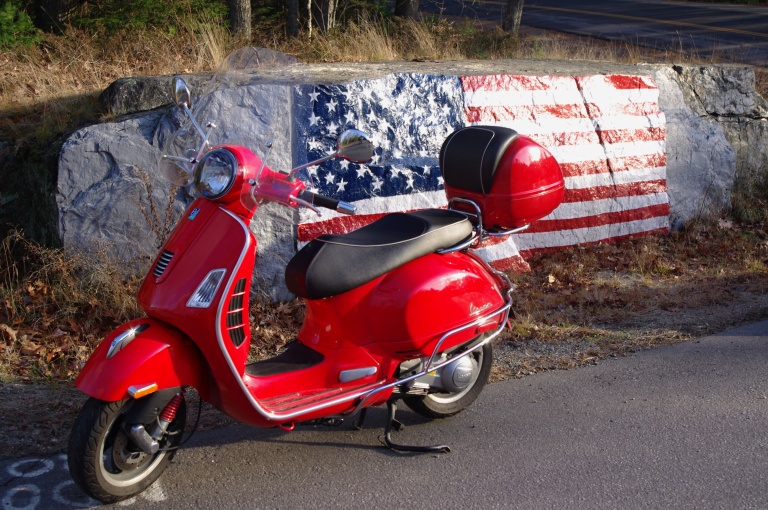 So, there you have it.  For me, the Vespa was the perfect first motorbike, on which I learned to ride and I learned to tour.  I eventually outgrew it, as my needs began to lean more toward highway riding, and the annual breakdowns have shaken my faith in the bike.  But I’ve had a wonderful time on it and would not trade those experiences for anything.

I hope this summary proves helpful to anyone considering a Vespa purchase.  Next post will be to show you what I bought to replace it!