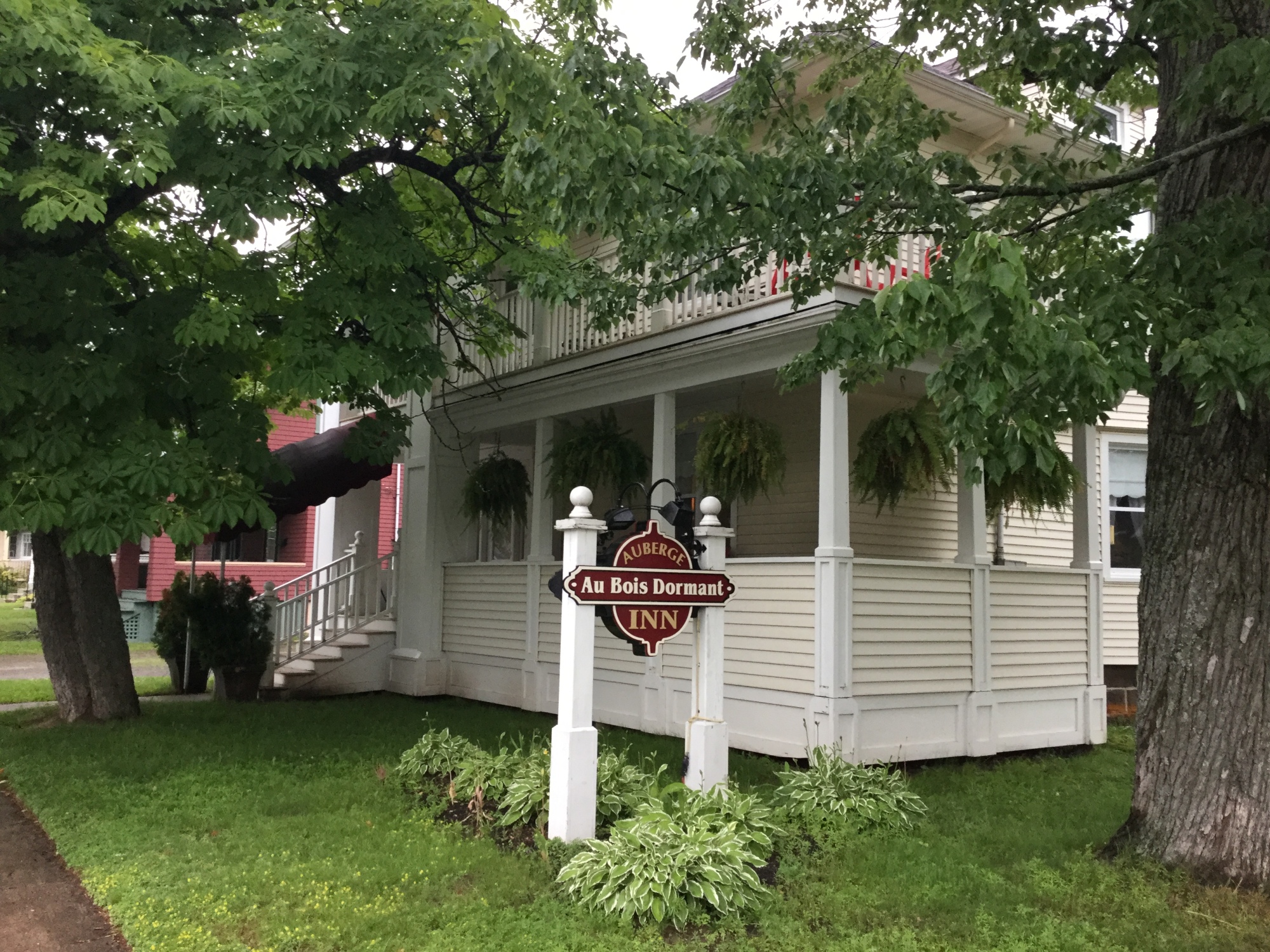 Rain is nothing to the average motorist. Unless we’re discussing monsoons of Biblical proportions, the biggest issue for a motorist is staying dry on the way to and from the car — but actually driving the car is no different, rain or shine.  For someone riding a motorbike, however, rain is a really big deal.  For one thing (stating the obvious), there are no windshield wipers, either on the windshield or on your helmet, so you can’t see the road as well.  Visibility is also reduced for other motorists, making it harder for them to see you.  Riding with water droplets incessantly spraying your chin and neck is an acquired taste, too (one which I have yet to embrace), but the worst part of riding in the rain is that, on a motorbike, the traction is dramatically reduced.  The worst, slipperiest spots are the wooden sidings which border railroad crossings, fallen leaves on the road in the autumn, and the white directional arrows affixed to the road at intersections; but traction is reduced everywhere in the wet, which means one must travel more slowly, lean more gingerly in the turns, and brake more cautiously at all times…..

which is why we only made it as far as Moncton today.  We are about an hour from the Confederation Bridge and Prince Edward Island, but after five hours of constant rain we had had enough.  We found a very comfortable bed-and-breakfast in a residential section of downtown Moncton (the “Auberge Au Bois Dormant”) and are grateful to be warm and dry. 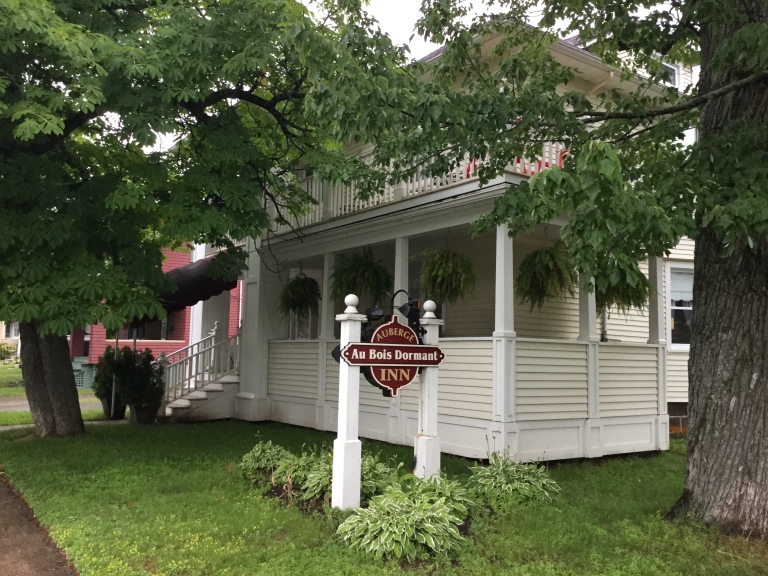 Moncton is a lovely, clean city, about the size of Portland, Maine with a bustling downtown business district and many attractive residential neighborhoods.  Coincidentally, today is Canada’s 150th birthday (“Dominion Day”), and the Monctonians (is that a word?!) are celebrating with a festival down on the banks of the Petitcodiac River.  We strolled downtown to find some supper and followed the sound of music to the festival, which featured an excellent pop music group (Canadian pop, I suppose, since many songs were in French) and the various souvenir- and food tents which you would find at any civic festival in the US.  Here’s a shot of the main stage: 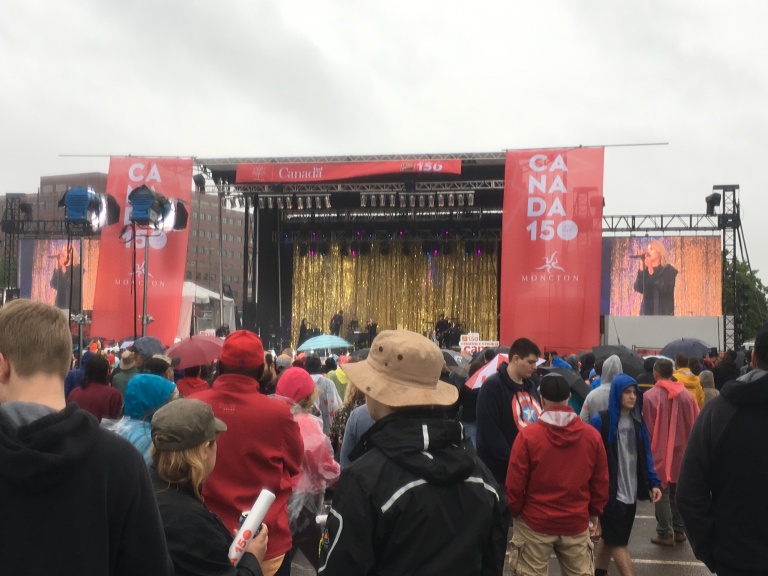 I believe the name of the group is “Couer de Pirate” (“Heart of the Pirate”? – last time I studied French was in the eighth grade….).

Here’s one more photo of the festival — you can just see the river in the background on the left: 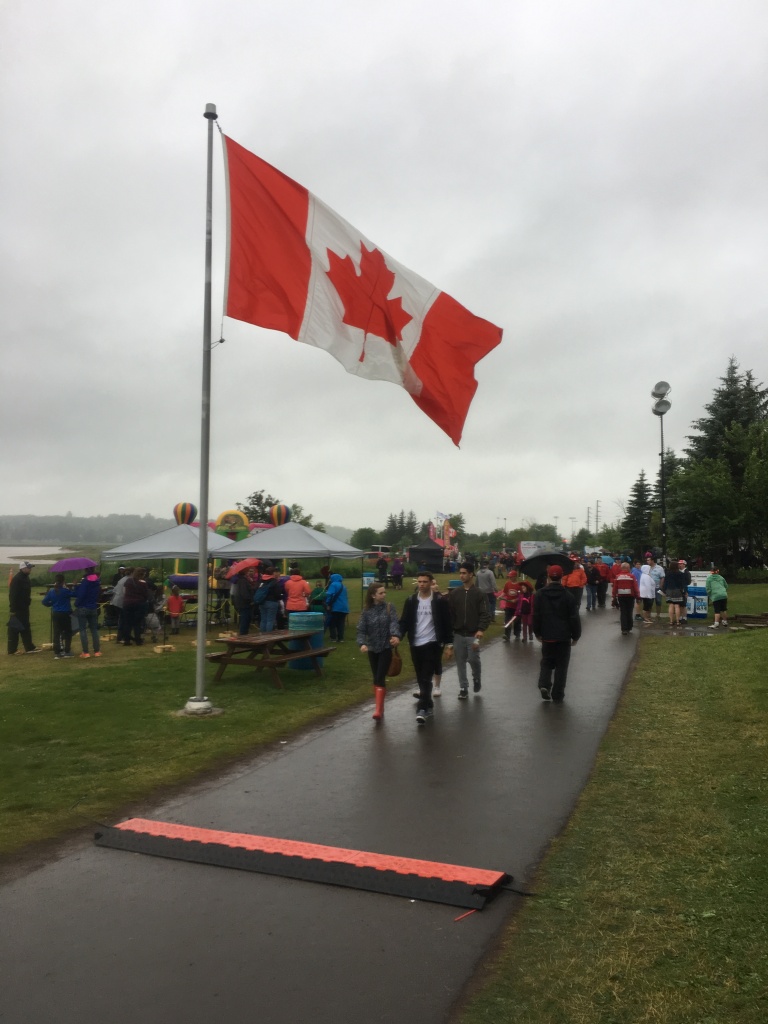 I regret not having more (and more attractive) photos to share, but today’s ride did not lend itself to photography, given both the pouring rain and the fact that the entire day was spent on some major highways.  We took NB-3 north out of St. Stephen after crossing the border, a decent but not great road through otherwise trackless forest (I was praying the bikes would keep running), which connected to the Transcanada Highway (CA-2).  This is a major, interstate-caliber, four-lane highway, upon which I typically hate to ride, but fortunately it was little traveled today so we could hang out in the right lane and let what few other people there were go by us on the left.  Another option would have been to go south and east via NB-1, but given the weather forecast (which turned out to be wrong!), it seemed the better choice today was to go first north, and then east on the Transcanada.  We will return via NB-1 later next week.

I should perhaps say a word about crossing the border for those readers who have never had the opportunity.  US-Canada border crossings can either be painless and quick (like ours was today) or a living nightmare.  “Can I see your passport?” — sure, here it is.  “Where are you going in Canada?” — PEI.  “How long will you stay?” — about a week.  “Will you be leaving anything in Canada?” — no.  “Have any tobacco, alcohol or firearms?” — uh-uh.  “Have any weapons?” — well, I have this here multi-tool on my belt.  “Is it a switchblade?” — no way! “When was the last time you were in Canada?” — this was a stumper, but I finally remembered being here two years ago to ride the Cabot Trail (see earlier blog posts); they had my license plate on file, and the date we crossed the border in 2015, so I passed the quiz!  “OK, enjoy your stay in Canada!”.  That’s how it went for us today, but be advised — the border agents have the authority to search everything you have, and even take your vehicle apart if they want to do so!  Living in Van Buren, Maine, years ago, we heard stories of people having their cars completely disassembled at the border, only to be told “OK, you’re free to go!” WITHOUT PUTTING THEIR CAR BACK TOGETHER!!  So, a word to the wise — the border crossing is like the TSA search when you board an airplane — don’t joke around, because they certainly won’t be!  And you don’t need the delays or the hassles!

So, we are hopeful that the weather clears tonight and we can make good time to PEI tomorrow; the goal is to cross the Northumberland Strait in the morning and be in Cape North, PEI for supper.  We’ll let you know how it goes!