Let me first say thanks to anyone who is still reading this blog, given the unconscionably long time between posts (the last one was back in March!).  But what with leaving a job, getting retired, getting a new job, getting a grandson, playing golf and paddling the Allagash, the summer just sort of slipped by.  We did have a cool scooter trip planned to Lake Placid, NY, but that turned out to be the one completely rained-out weekend of the summer, so we didn’t go.  And Francis and I were planning a trip to Madawaska, Maine (one of motorcycling’s famed Four Corners), but the summer passed to the point where I didn’t have a week to devote to scootering.  So, there’s this one lousy post to show for the entire summer so far.  Lake Placid and Madawaska are still on the radar, though, so we can hope for more posts before the snow flies!

Anyway, Robin and I did have several opportunities to visit Fort Popham over the summer and it makes a lovely trip.  Popham Beach is one of the great ocean beaches in Maine, and it really begins at Fort Popham, which guards the entrance to the Kennebec River and Merrymeeting Bay and so protected the water approaches to Augusta and the manufacturing cities of Lewiston and Auburn during the Civil War.  Both the Fort and the Beach are accessed via US-1 to Bath, and then by way of ME-209 through Phippsburg.

However, when you first exit US-1 in Bath, the route to ME-209 takes you right past Bath Iron Works, Maine’s biggest employer and manufacturer of destroyers and littoral warcraft for the U.S. Navy.  In fact, this crane dominates the skyline around Bath, and as I knew I would be blogging about this trip, I thought it would be cool to get a photo of it.

There is a parking lot across the street from BIW and we parked the scooters there; I then took out my camera and walked across the street into the BIW parking lot, looking for a good angle for a photo.  Immediately upon raising the camera to my eye, however, a pickup truck marked “security” appeared, drove up to me and disgorged a security officer, who informed me that BIW is a U.S. Department of Defense site and all photos are absolutely forbidden.  He went on to say that by rights he was required to take my license and look me up on the federal terrorist watch list, but because I appeared to be just a harmless tourist with no evil intent, he would let me off.

I assured the guy that I was not, in fact, on the terrorist watch list, but he was welcome to look me up if he wished, and that I would respect his wishes and take no photos.  I apologized for his inconvenience and, turning off the camera, I walked back across the street to the parking lot where our scooters were parked….

whereupon he drove up to me again and informed me that he only has jurisdiction over BIW property and I was perfectly welcome to take photos of the crane from the street!  He went on to proudly share information about the crane, including the fact that it is the second biggest of its kind in the country.  So, that’s why the photo above is marred by all the electrical wires — but you can still see the crane! 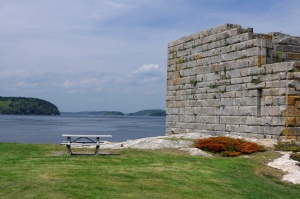 Here are some views of Fort Popham.  Each of the archways originally held a cannon, facing out over the mouth of the Kennebec.  You can see the archways to the left in the photo below: 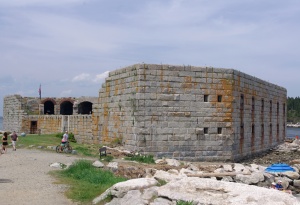 One of the great things about Fort Popham is that the beach here, which begins to the right of the fort in the photo above (you can see a blue umbrella which is on the beach), is free to access — unlike at the state park further along.  Parking, although limited, is free as well.

The fort encloses a grassy parade ground, very pleasant (see Robin in photo above), and during one trip we counted 24 seals swimming in front of the fort.  Note that the currents here are dangerous; swimmers should stay close to shore (there is no lifeguard here, as there is at the state park) and only capable paddlers, comfortable in currents, should paddle near the fort.

This sign appears at the entrance to the fort; to the right is a view across the parade ground, from one side of the fort to the other.

Here are some views from inside the fort itself.  Note the interesting stonework in the arches and the stairs: 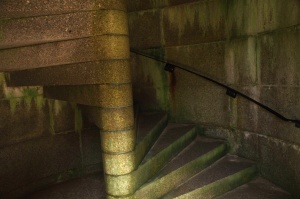 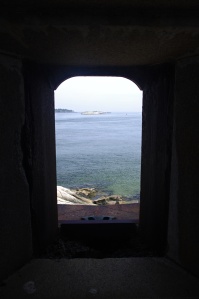 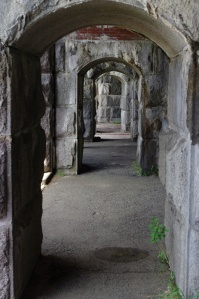 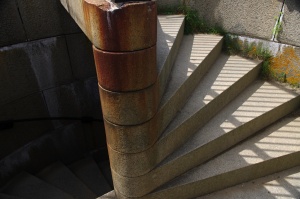 There is some interesting signage for history buffs inside the fort as well: 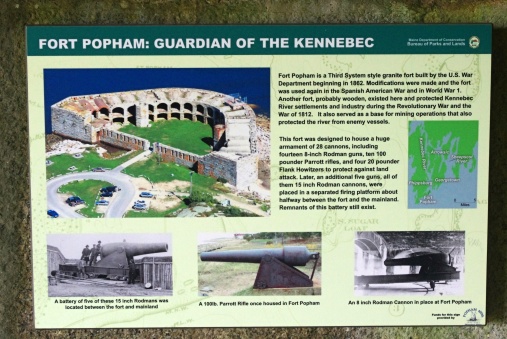 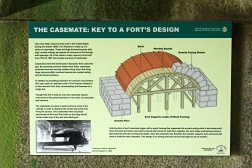 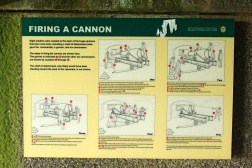 Here are some more views of the fort and the surrounding landscape: 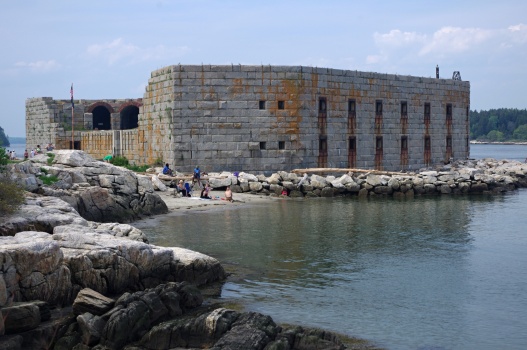 There is a special parking area for motorbikes, directly in front of the fort!

Popham Beach State Park would be your choice if you wanted barbeque fire pits, flushable rest rooms, a bathhouse and lifeguards.  But if you want to experience the same beach, for free, without the bells and whistles and with a historic fort thrown in, pass the state park and head to Fort Popham!  There are also some good restaurants within a stone’s throw of the Fort if you need a lobster roll to tide you over!