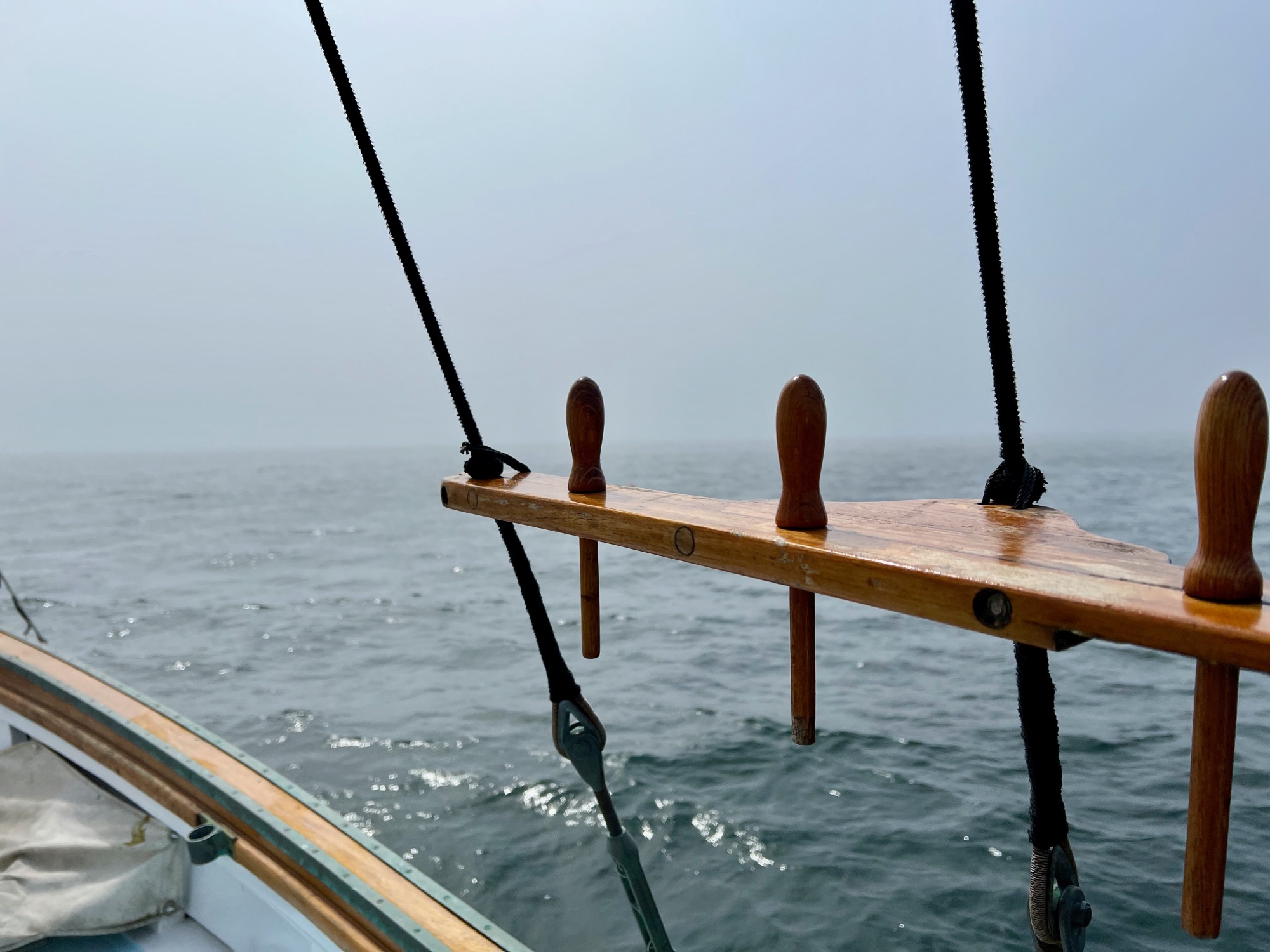 My old friend Bill, long removed to North Carolina, surfaced in Maine this week with a novel idea: let’s meet up and go for a chartered sailing trip in Rockland! An outstanding idea! Plans were hatched and this morning we made the 90-minute drive across ME-17 from Augusta to Rockland, where we parked in front of the Middle Pier (free!) and met Captain Tyler, who introduced us to his classic wooden ketch named “Morning In Maine”.

Captain Tyler offers two-hour cruises departing Rockland each day between Memorial Day weekend and early October; we found the $50/person fee to be reasonable and well worth it, for not only did we get a lovely sail into Penobscot Bay, but Captain Tyler is a wealth of information about the region, and sailing in general.

The route begins off of Owl’s Head, itself a fascinating place to visit with many hikes in the area along with the unique and outstanding Owl’s Head Transportation Museum (see earlier post). The Owl’s Head lighthouse guards the promontory.

Apparently, this is one of only six remaining Maine lighthouses making use of the Fresnel lens, which is capable of reflecting the lighthouse beam all the way to the horizon. There is also in Rockland, by the way, a Maine Lighthouse Museum for those with a special interest in all things lighthouse, although we did not visit.

I have almost no experience on a sailing vessel of this size (55 feet), and so I found it fascinating to watch the Captain motor the boat out of the harbor, then shut down the engine and raise the sails. He invited customers to assist in this task, and a couple of guys were willing to lend a hand.

I did find it very interesting to note the complete absence of engine noise, and no scent whatsoever of diesel fuel or engine exhaust; only the sounds of waves splashing against the hull and the wind luffing the sails. Morning In Maine has three sails riding on two masts; Captain Tyler explained that a ketch has the forward mast taller, and a schooner the aft mast taller (or vice versa, I can’t remember which). Thus there is a mizzen sail at the rear of the boat, the main mast in the center, and a jib sail in the front. We were strongly discouraged from moving forward of the main mast, as the jib sail can abruptly and without warning switch sides of the boat and in a heartbeat turn your sailing into swimming.

As we moved toward Monroe Island, the fog came in.

Morning in Maine is equipped with a fog horn, which (according to the captain) must by law be sounded every two minutes when surrounded by fog. I found it only mildly annoying — while certainly not deafening, it was nonetheless loud enough to interrupt any conversation you might be having. Monroe Island was purchased in 2018 by the Maine Island Heritage Trust and is now preserved for public use. Apparently there are numerous lovely hiking trails, campsites and beaches on this island and anyone can kayak or otherwise boat there and take advantage of this unique recreational opportunity.

On our way back into Rockland Harbor we were passed by two other sailing vessels, but we did not get close enough for me to identify any of them.

The route back to Middle Pier passes the renowned Samoset Resort, home to one of the most spectacular golf courses in Maine (“the Pebble Beach of the East”), in which half the holes have ocean views and are played right along the bay; note that Maine residents can play for a sharply reduced rate during the month of May, in case any readers qualify for this tremendous bargain. And then we sailed right past the Rockland breakwater and the iconic lighthouse at the end of this mile-long walk into Penobscot Bay.

So — a two-hour sail on a fifty-year-old ketch with a knowledgeable and entertaining crew amidst unparalleled Maine scenery for only $50 — what’s not to like? The sunset cruises, by the way, are an extra $5 (although I’m not sure why). Tickets can be purchased at wwww.amorninginmaine.com — highly recommended!