Most of the northern half of Maine, save for a relatively small strip along the eastern border with Canada, is unorganized territory, primarily owned by paper companies. Some years ago, these large-area landowners banded together to form the North Maine Woods, a consortium dedicated to managing these vast forest lands for logging and recreation (including paddling, camping, snowmobiling, fishing and hunting).

To achieve this purpose, the North Maine Woods (NMW) built a number of logging roads through what was, at least until the late 1960s, an almost trackless forest.  One of the foremost of these roads is the Golden Road, which leaves Millinocket in the southern reaches of the NMW, passes north of Moosehead and Seboomook Lakes to the west, and terminates in the trackless forest at the Canadian border east of St. Zacharie, in Quebec Province, Canada.  This is a rough-but-passable dirt road, wide enough for two laden logging trucks to pass each other, running roughly northwest from Millinocket to Ripogenus Dam and, for much of that length, paralleling the southern shore of the West Branch of the Penobscot River.  Maybe twenty miles along the Golden Road from Millinocket lies the Abol Bridge across the West Branch; on its eastern end is the Abol Bridge Campground. 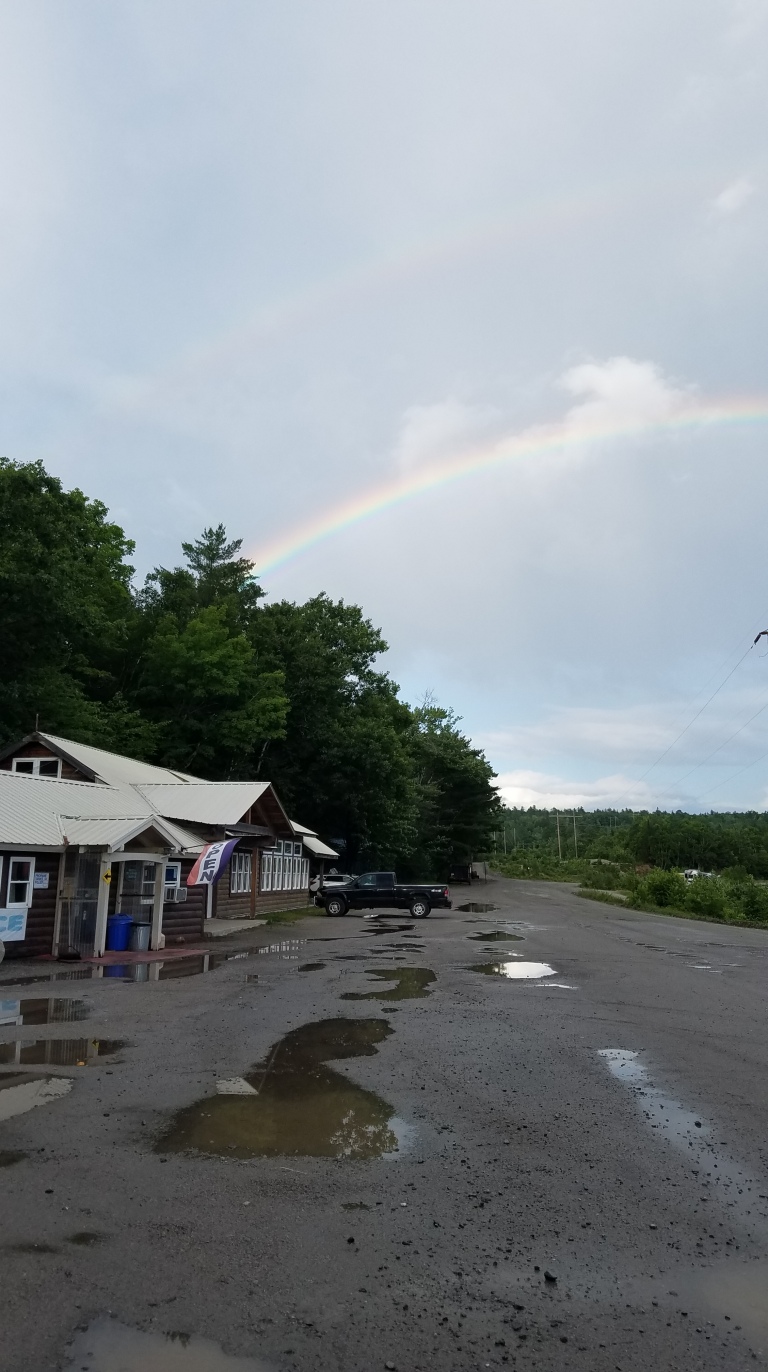 Here is a view of the Campground Store from the Abol Bridge; the double rainbow is a result of the almost steady rain we enjoyed (endured?) throughout the weekend.  We were greatly impressed with the campground and its staff — cordial, helpful and colorful individuals dedicated to customer satisfaction.  And this is the only RV campsite of which I am aware that offers a delicious continental breakfast as part of the reservation fee!

The campground itself is a collection of RV sites (no hookups) and tent sites, situated right on the banks of the West Branch, with majestic Mt. Katahdin (the highest mountain in Maine) in view across the Abol Bridge and along the bank of the river.  The photos below were taken from our campsite right behind the Little Guy:

We arrived Friday afternoon and the rain held off until later that night, so we enjoyed the sunset and the obligatory campfire with s’mores. 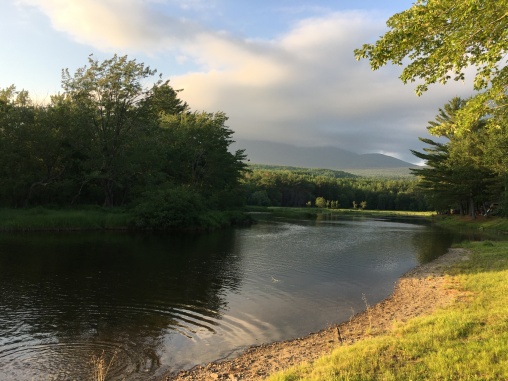 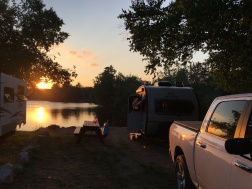 Daughter LJ (whom I visited in June, chronicling that trip elsewhere in this blog under the heading “Ohio”) flew to Maine for this Abol trip so that we could climb Mt. Katahdin.  Because of the pouring rain on Saturday, we decided instead to explore the area via truck as there were a couple of nearby landmarks I wanted to see.  The first of these is the Katahdin Ironworks, the remains of a Civil War-era iron foundry, accessible via ME-11 heading south and west from Millinocket.  Here are two views of what remains of the foundry itself: 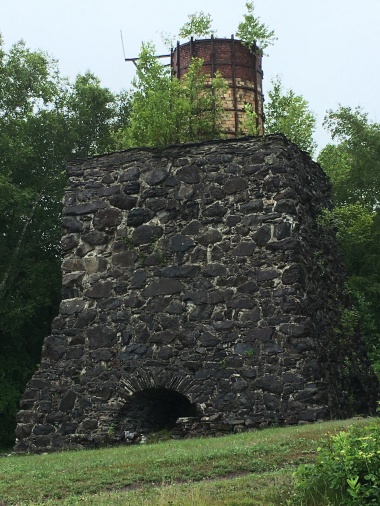 You can walk inside the foundry.  If you do, look up! 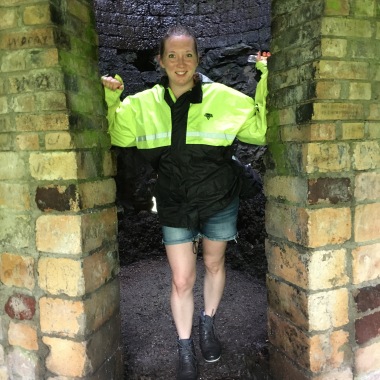 From Katahdin Ironworks we headed east, back through Millinocket, to explore the new Katahdin Woods and Waters National Monument.  This new park was donated by Roxanne Quimby of Burt’s Bees fame, who began purchasing land east of Baxter State Park around 2001 in hopes of creating a national park.  When the locals began to oppose the concept, fearful of losing access to logging, fishing, hunting and snowmobiling lands and resentful of federal intrusion, Quimby instead offered the land as a National Monument, much easier to create under the auspices of the Antiquities Act.  The lands in question are beautiful, with stunning views of Mt. Katahdin and a stretch of the East Branch of the Penobscot River included.  However, the park itself is in the very nascent stages of its creation and, in my opinion, is not yet ready to receive the public.

For one thing, the road through the park makes the Golden Road (a rough, bumpy, potholed, washboarded dirt logging track) look like Interstate 95.  It is in many places not wide enough for two cars to pass each other, and is so rough and rocky that I would not attempt it without a high-clearance, four-wheel-drive vehicle.  For another thing, there is no visitor center or visitor services whatsoever.  It is remote, rocky, rough and unforgiving — not even your cell phone will work, so if you get in trouble, you are on your own.  I think the road needs to be widened (paved would be better), the signage vastly improved, and a visitor center and some services provided before I would visit it again.

However, keep in mind that I have spent most of my summers camping and paddling in this part of Maine.  I have seen the boreal forest, the bogs and waterfalls and lakes, and Mt. Katahdin many times.  To someone without those experiences, I readily acknowledge that this park would be a magical place.  It is definitely country worth saving for posterity, and country worth seeing.  However, for us, with the rain and mist blocking the Katahdin views and two hours invested to cover only about twenty miles of road through the park, we decided it was not worth our time and turned back.  We did stop at one of the vistas for a lovely lake view:

The next morning dawned dry so we decided to make our assault on Mt. Katahdin.  For our adventure we drove back toward Millinocket from Abol Bridge, picked up the Baxter Park Road (which parallels the Golden Road for the first several miles of its length) and drove it up to Roaring Brook Campground, from which we would attempt to climb to Chimney Pond.  We held out the option, once at Chimney Pond, of attempting to summit Katahdin itself.

I should interrupt myself at this point to say that, for anyone reading this blog who might be inspired to hike in Baxter State Park and on Mt. Katahdin, do your research!  Katahdin is a magnificent mountain, the terminus of the Appalachian trail and the highest mountain in Maine.  But know that the environment turns alpine above timberline, the weather can turn deadly in minutes, and careful preparation is the key to safe and successful hiking here.  Entire books have been written about Mt. Katahdin (check out the classic “Lost on a Mountain in Maine” by Donn Fendler), and the more you know about it before you go, the better. If you want to hike and climb here, I strongly recommend the Appalachian Mountain Club’s “Guide to Maine Mountains”, which will give you detailed descriptions of Katahdin’s trails and hazards, along with excellent trail maps.

With that disclaimer, I will continue my narrative.  We four intrepid hikers (including four-year-old Jaxon) registered at the Roaring Brook ranger station and set out on the Chimney Pond trail.  Here is a view of your author (his best side!), just to give you a sense of the steepness and ruggedness of this 3.3-mile trail:

Jax made it about a mile before running out of gas, an excellent effort; he and his mom returned to the campsite for an afternoon of swimming in the West Branch, while LJ and I soldiered on up the mountain. Glacial ponds and Katahdin views eventually appear trail side: 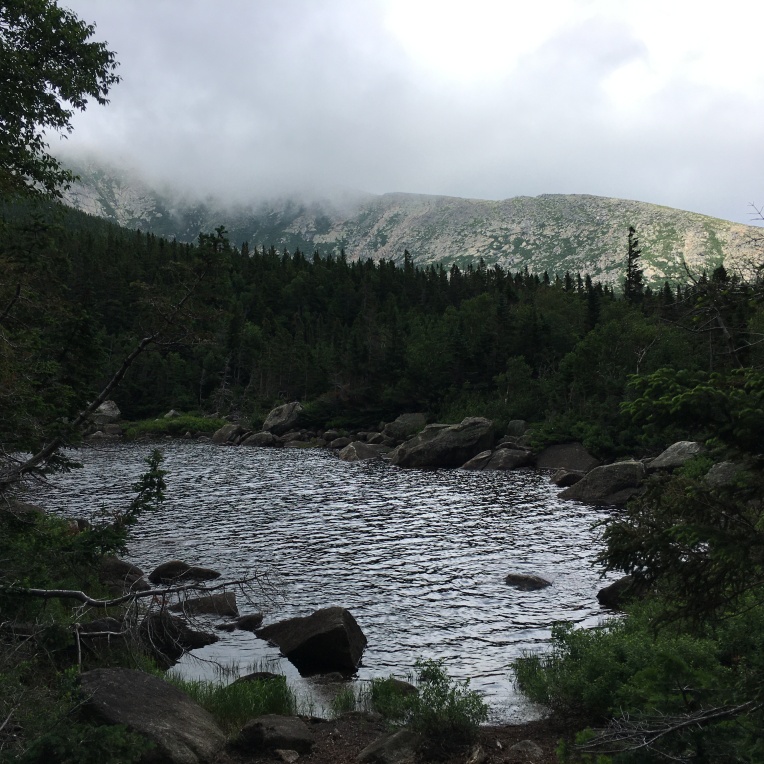 With calves screaming and chests heaving, we finally strode out into the Chimney Pond campground, a collection of lean-tos and bunkhouses accessible only by foot.  Chimney Pond is situated right at the base of Mt. Katahdin itself, and so is the nexus for most of the trails that ascend the summit.  Upon arrival we were greeted by ranger Andy, who asked our plans.  We told him we were going to eat lunch and then consider whether to attempt the summit.  He replied that we could do so if we wished to face the sleet, lightning and 50MPH winds that were currently pummeling the mountaintop; we decided that, given the lateness of the hour (it was already 1:30 in the afternoon, we had been climbing three hours, and we had no idea how long it would take us to get to the top and back), the brutality of the conditions and the exhaustion we already felt, the prudent thing to do was to turn back.

But Chimney Pond is itself a magical place, a spiritual vortex where the Prime Force spent its creative powers in surpassing beauty.  Neither words nor photos do it justice.  Awesome spires and massive granite buttresses rise vertically right out of the pristine, crystalline purity of the water directly into heaven’s vault.  If I could, I would sit beside Chimney Pond forever.

The camera offers too pathetically small a window through which to adequately communicate the grandeur of this magical place.  And remember that the clouds were obscuring most of the mountain in the photos above — you really have to go there and experience it for yourself.

We returned, exhausted and soaked but exhilarated (it poured rain all the way down the mountain), to Roaring Brook Campground, climbed gratefully into the truck, and drove back down the Park Road to Abol Bridge, where we enjoyed a well-deserved supper and a spectacular sunset over the West Branch.

One could spend a week or more in Baxter State Park, hiking Katahdin and nearby mountains and paddling the East and West Branches.  Any reader inspired to attempt Mt. Katahdin should consider renting a lean-to at Chimney Pond for two nights; climb to Chimney Pond and stay there the first night, summit Katahdin and return to stay at Chimney Pond the second night, then the third day descend back to Roaring Brook and your vehicle.  Know also that there are beautiful rustic cabins for rent in the Park at Kidney and Daicey Ponds, right on the water, and you can drive to those.  Truly, Baxter Park is a jewel and one of Maine’s many treasures, well worth whatever effort it takes to experience it.  Just do your research in advance, plan carefully, and don’t let pride take you forward up the mountain when prudence dictates that you turn back!

One thought on “Abol Bridge Campground”