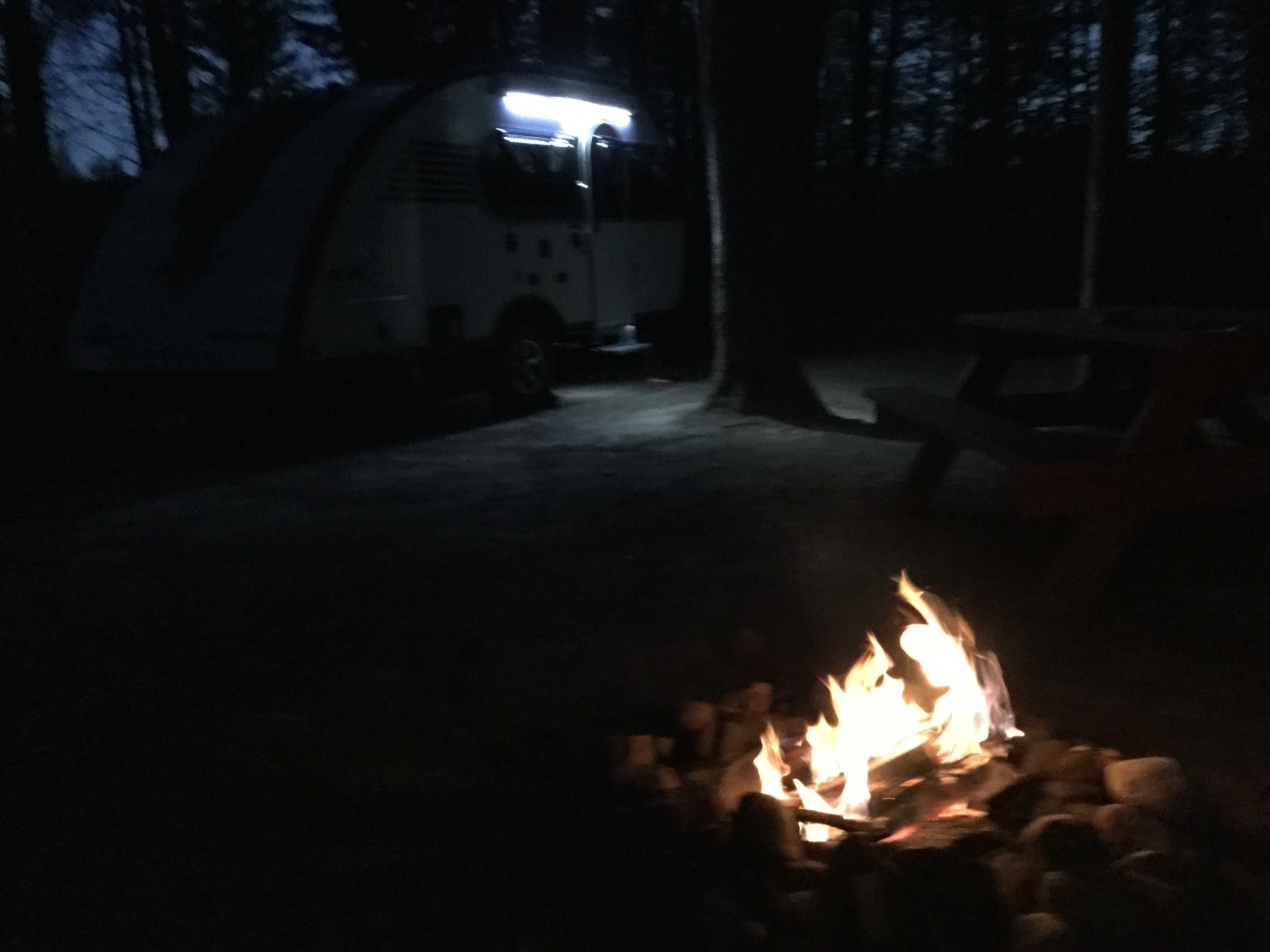 There were two reasons I chose Stony Brook Recreation RV campground in Hanover, Maine for my first outing with the Little Guy Max:  1) it is just over an hour from home, via decent but quiet roads, and 2) it is open year-round; knowing this before I came, I thought I would check it out as a possible winter camping spot.  It is adjacent to two of the best Nordic ski areas in Maine, and I am thinking that the Little Guy would be a fine ski chalet for winter vacations and Nordic ski weekends.  So if this campground works out, it has possibilities for future outings.

The trip here was stressful only insofar as I have no experience towing a trailer of this size and so do not know if what I am experiencing is normal or if trouble is brewing.  I left the back window of the truck open so I could hear anything untoward, and — in a brilliant move, if I say so myself — I bought an extension mirror for the truck this morning, so I can actually see behind me on the road.  This made the experience much less stressful than it would have been had I only been able to see the trailer behind me.

The folks here at Stony Brook are very nice.  The check-in went fine; they have a well-stocked store from which they run the campground, along with a restaurant.  A person could, in fact, bring no food whatsoever and just eat from the camp store if desired.  For some reason, they had my reservation but had lost my contact info — it was no problem duplicating the info, although I will have to check later to see if my credit card got charged twice.

The campground itself offers two options for the intrepid RV camper — a sunny knoll with RVs scattered about, or a wooded option which I thought I would prefer (there are also tent sites, and they rent out trailers as well).  As it turns out, the sunny knoll might have been more scenic — I am wedged in here between an ugly house trailer and some kind of recreation building, with a permanently-installed RV right behind me whose occupants apparently favor blues music, as it has been playing almost non-stop since I arrived about 4PM. 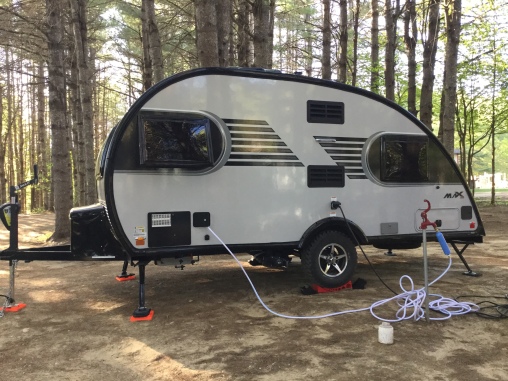 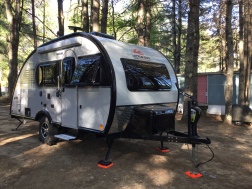 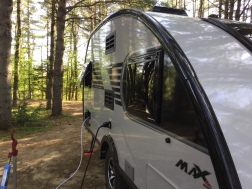 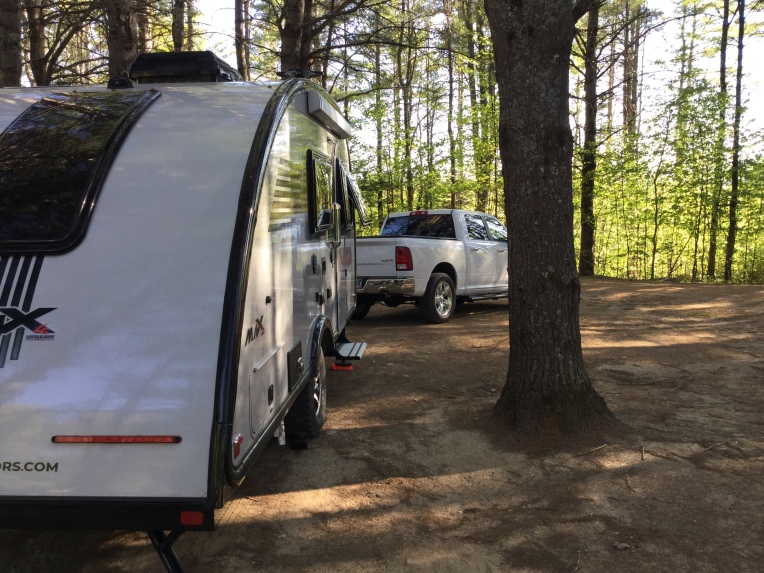 You can see the ugly house trailer in the small picture above (I chose to minimize the photo size to save you the discomfort of having to properly view it).  The rest of the site appears more rustic and wooded in the photos than it really is.  I do, however, have a nice forest view out the front windows, very pleasant when seated at the dinette: 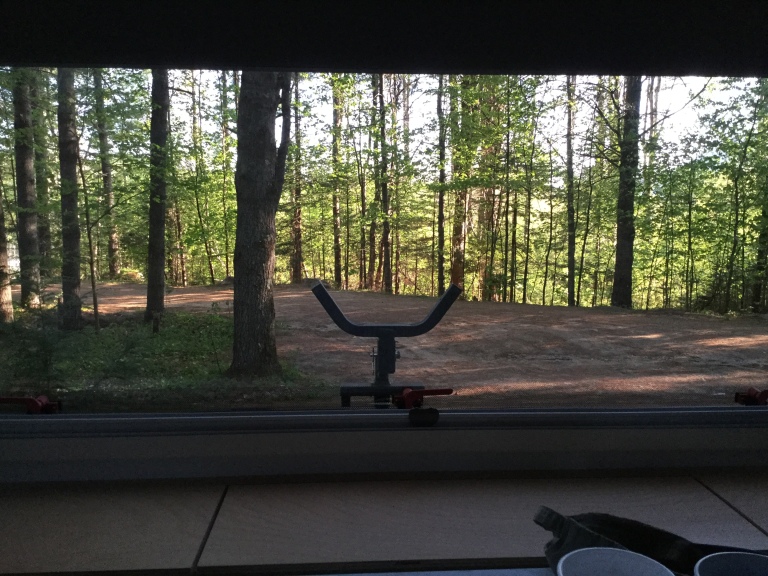 I am not surprised at the basic level of camping here, having passed numerous RV parks over the years where rigs are sardined in side-by-side.  But I have been spoiled, camping with Robin at outstanding wilderness spots like Lobster Lake and the Allagash.  Against that level of competition, this RV campground is a very distant second, but probably better than most. Anyway, after I leveled the Little Guy and disconnected the truck, I entered the trailer to discover that all of my new Corelle dishes had fallen out of the cupboard en route and were smashed in a pile on the floor.  Upon subsequent investigation it turns out that I lost all of my cups and one of the small dessert plates; however, the big plates, the bowls, and five of the dessert plates survived.  I will have to bungee the cupboard doors closed for the trip home and then invest in some door catches to beef up the OEM ones.

So, I cleaned up the broken glass and returned to the camp store to buy firewood and (maybe) a mug or two so I could have coffee in the morning.  The firewood was no problem (albeit expensive); there were, however, no mugs for sale — but the kindly proprietress gave me a couple of styrofoam cups to carry me through the weekend.

I returned to the trailer around suppertime and endeavored to fry a hamburger for supper.  The Little Guy has a two-burner propane stove which works flawlessly — as, I soon discovered, does the smoke alarm which apparently took exception to my hamburger.  I turned on the overhead fans and opened all the windows, which eventually silenced it so I could eat in peace.

Update:  one of the guys who has been incessantly bombing through here on an ATV happened to stop at the blues aficionado campsite behind me, so I buttonholed him with questions about winter camping here.  A very nice fellow, also named John, he took me over to meet his wife and disclosed that it is her parents who own the campground.  They assured me that one could indeed winter camp here with full hookups.  They were quite intrigued with the Little Guy and so I invited them to step in for a look, which they did as discreetly as possible. Very nice folks, so I am hopeful that they will observe the nighttime quiet hours as I suspect they have more pull with the landlords than I do.

Tomorrow I hope to play golf at the local course in Bethel at the Bethel Inn.  This is a fine upscale lodging option for those seeking a respite in Maine’s western mountains.  Why would you come here for a vacation?  In a word, mountains — Bethel is on the eastern edge of the White Mountains and abuts the White Mountain National Forest, with the added advantage of whitewater canoeing on the nearby Androscoggin River, whose headwaters rise in the Whites.  Some of the best hiking in the northeast is within an hour’s drive of here. 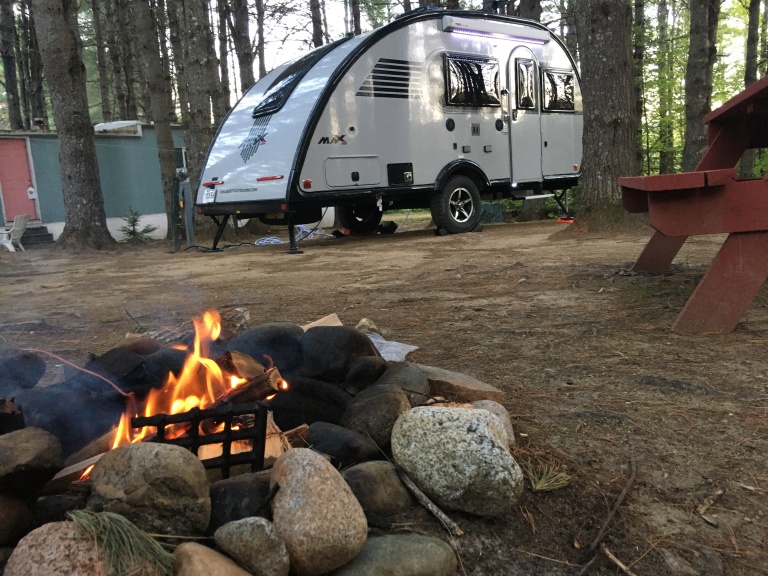 Well, night has fallen, the fire is burning low and the mosquitoes are coming out so I will retreat to the Little Guy until morning. One more night and my trial run will be over!  I’ll attempt a summary when I get back home! 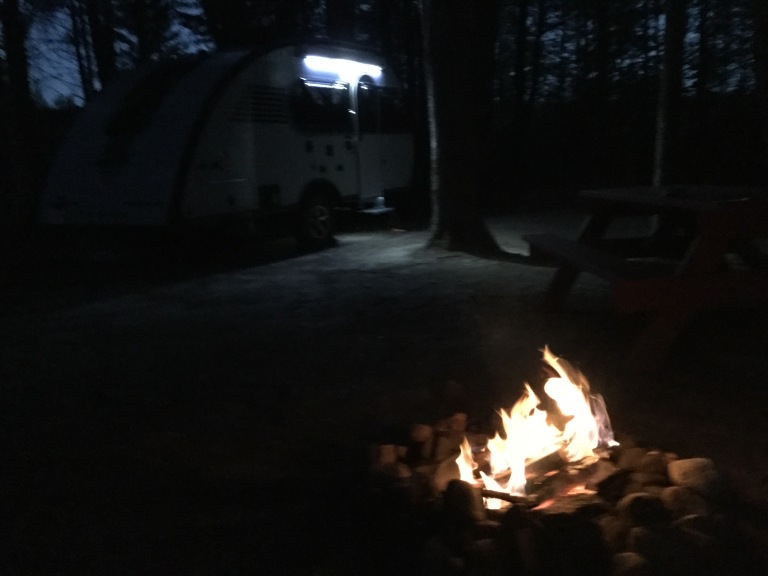