About a month or so ago I had a couple hours to kill and thought it would be fun to take a short ride over to the Twin Bridges, a lovely sojourn to the Androscoggin River between Leeds and Livermore.  However, I had not visited the spot since last fall and had forgotten the exact route — which brought me to the invaluable DeLorme’s “Maine Atlas and Gazetteer”, a compendium of outstandingly detailed highway maps and points of interest surveying the entire state.  Any reader unaware of this resource should pick one up (I believe there is one for every state in the Union) as it lists every state park, every campground, and every point of interest in the state along with superb maps with which to find them.  This is really too big a tome for use while riding but it can’t be beat for trip planning and route finding before the ride.

Anyway, as I found my way to the appropriate map in the Gazetteer and refreshed my memory of the route, something on the map caught my eye: Monument Hill in Leeds.  I realized that if I just cut across from Church Hill Road in Greene to ME-219 via North Road, I would go right past it.

This rustic sign marks the beginning of the trail up Monument Hill, a very short and easy hike through open forestland to a Civil War monument and a pleasant view at the top. 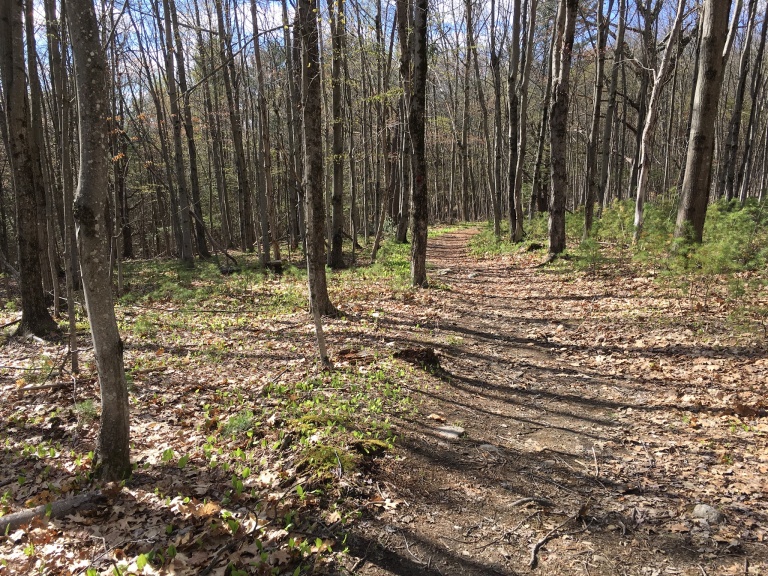 It appeared to me that much of this area had recently been forested as there were many stumps and lots of broken land visible.  The early going is somewhat wet and so some kind agency or benefactor has built boardwalks over the soggy spots.

There is no parking lot at the trailhead, just a minuscule pull-off beside the road, into which a young family was being disgorged from a minivan as I pulled up.  After stowing my biking gear and heading up the trail I quickly overtook them, whereupon one delightfully gregarious and loquacious young fellow of four or five years tailed me up the hill, over his mother’s protests, to inquire vociferously of me whether I thought there were bears on this trail and, if there were, what I thought would be our best course of action.  I was thus distracted and amused for ten minutes or so until the monument itself came into view. 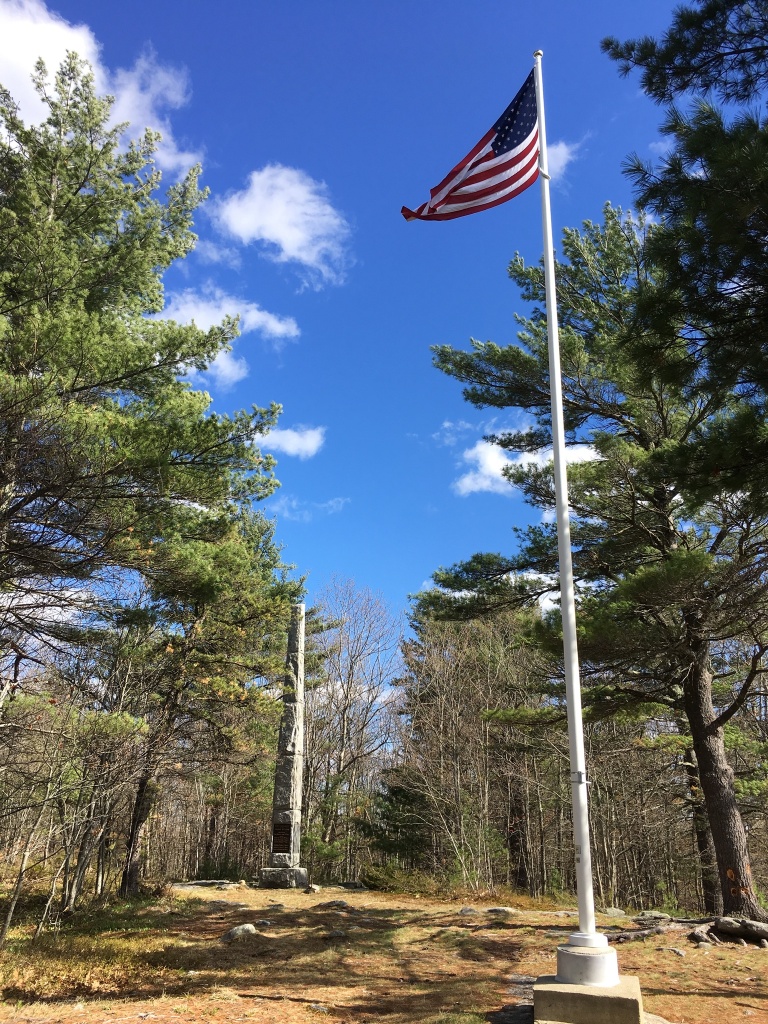 This obelisk pays tribute to the men of Leeds who served our nation in the Civil War. 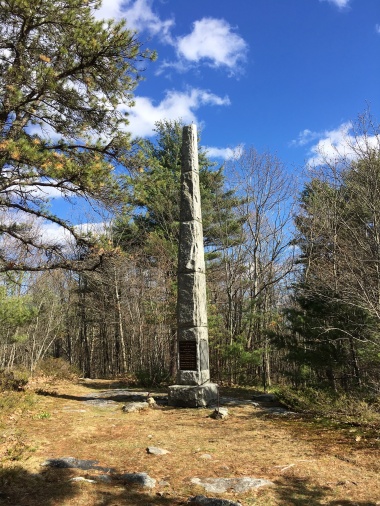 A pleasant view of the surrounding countryside is available near the monument, providing an excellent picnic spot (although there are no tables, fire rings or other facilities here). 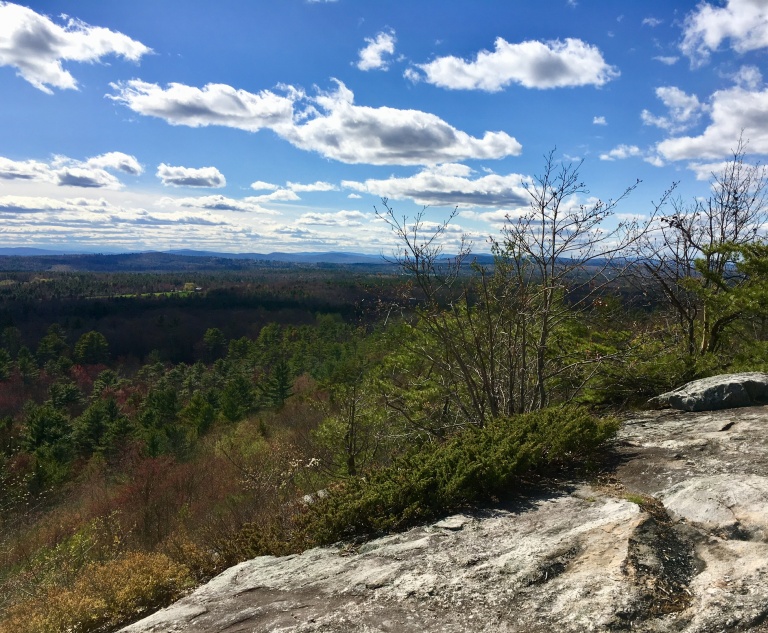 The summit affords a wide enough area that several groups could find a picnic spot on the off chance that the trail was crowded. 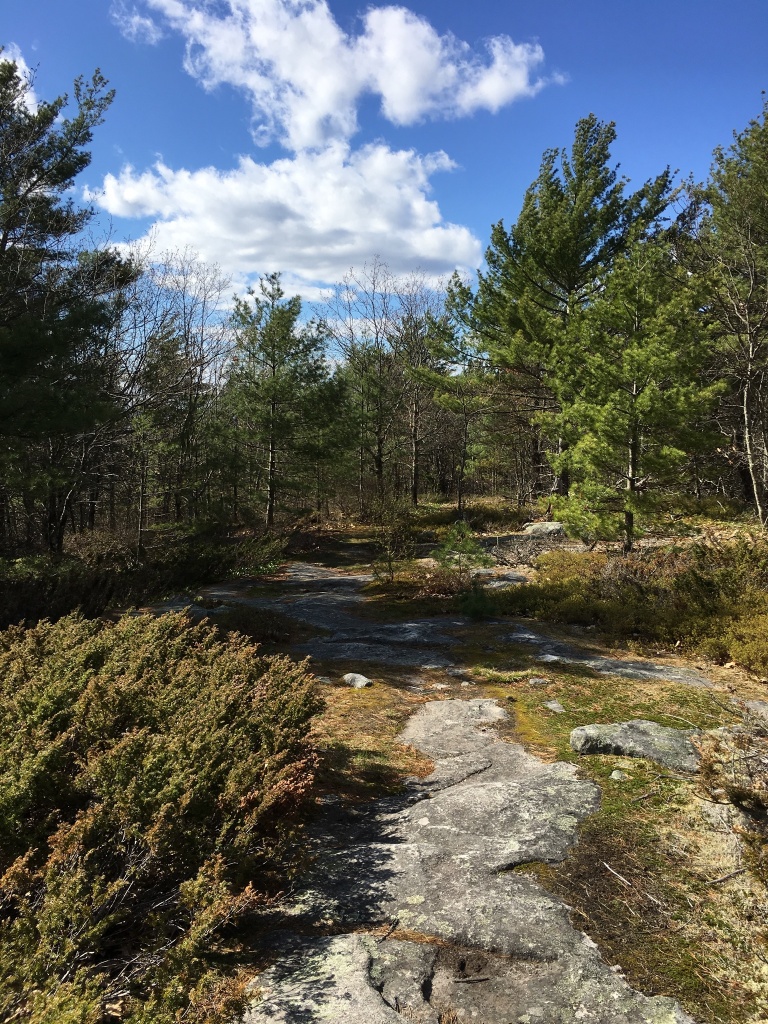 Any average adult could probably climb this hill in fifteen minutes or so, making it nowhere near a “destination spot” worthy of a long ride.  However, if you are in the Augusta/Lewiston area already, with a morning or afternoon on your hands — or especially if you are looking for a first hike for youngsters — this is a very pleasant stop.

Sadly, however, we did not spot any bears……