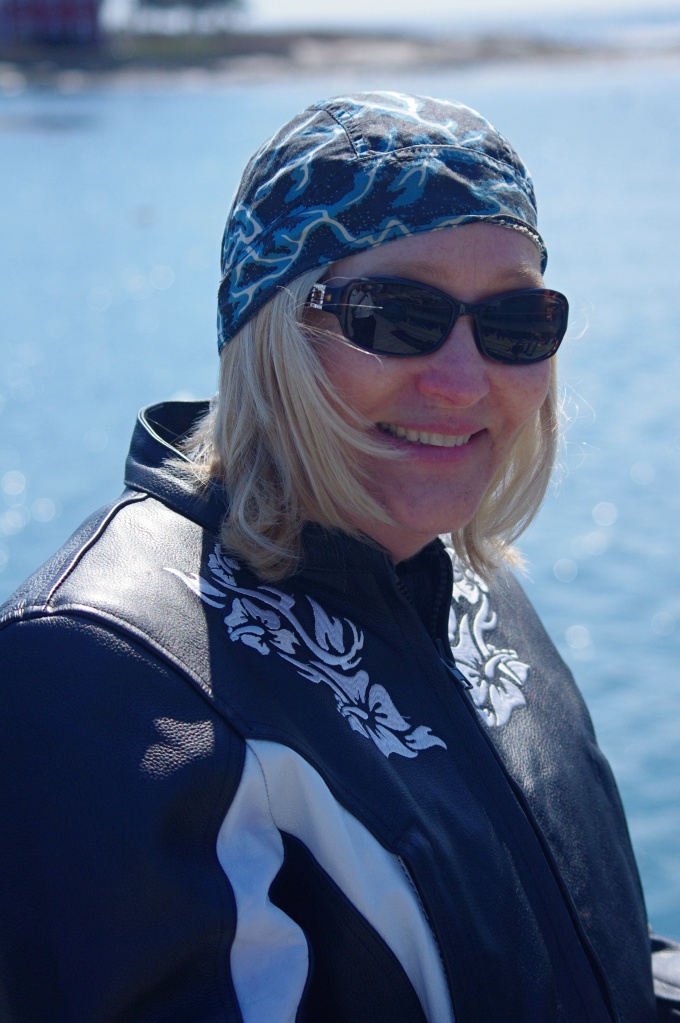 And so I face an impossible task — attempting, within the narrow confines of a lowly blog post, to summarize Robin’s life and make sense of her passing.  I know, this is certainly not the place to eulogize anybody, much less one’s life partner — but it seemed equally wrong to just continue blithely blogging on about scooter trips as though nothing has changed, when in fact the one person who inspired the whole thing and was such a huge part of it — my entire life, really — is now gone.  And I am also well aware of the futility of doing justice to all that Robin was in this short space, along with the very real risk of trivializing her life or getting lost in maudlin sentimentality — but how much worse, how insulting to her memory, to just make no mention and take no notice that she died!

So, for all these reasons, I have not posted until now.  Robin fell ill on October 18, just a couple of weeks after our Lubec trip, and crossed over on October 29, 2018.  But as I intend to keep riding, and to keep blogging about it, to do so without somehow here acknowledging her passing (and the end of the forty-year love story that was our marriage) just feels totally wrong.  So I will do the best I can with this impossible task and beg the reader’s indulgence.

In a very real sense, Robin started this blog in 2010 in Sarasota, Florida.  We had traveled there to visit Aunt Sharon, and agreed in advance that each of us would have the opportunity to try a “bucket list” activity of our choosing on this vacation trip.  Robin, it turns out, had always had a dream of riding a motor scooter on a tropical island, and this trip presented (we thought) an excellent opportunity to do just that — there was a scooter rental shop in Sarasota, from which we could ride out to several of the adjacent islands (“keys”, in the local vernacular) of Sarasota Bay on Florida’s Gulf Coast.  So, on the appointed day, we drove to the rental place and signed up to ride scooters, neither of us ever having done so before.

And here is where I have the opportunity to tell you something of the tenacious nature of Robin’s spirit, for our “ride” ended in the first forty yards with Robin dropping the scooter in the parking lot on the first turn she attempted to make.  Her “bucket list” dream shattered that day, the shop proprietor refused thereafter to rent to us and so we rode a tandem bicycle around Sarasota instead, and dreamed of what might have been.

But Robin refused to give up on this dream, and it sort of percolated in the background for a couple of years until, in the autumn of 2012, we signed up for the Motorcycle Safety Foundation “Basic Rider Course”.  We found it frankly terrifying; not only were the lectures basically a master class on how to get killed on two wheels, the motorcycle itself was a diabolical engine of frustration and fear.  Long story short, Robin aced the written test but failed the riding test, which meant that at the end of that course she received her permit instead of her license.

No matter — undeterred, the next summer she bought her Honda PCX-150 scooter (no shifting!  Hand brakes! Scooters were the perfect solution for both of us!) and practiced on it until she aced the riding test and earned her motorcycle license.  And after that, there was no stopping her — we rode all over northern New England, Atlantic Canada and the state of Maine (she on her “Percy”, me on my Vespa); and you can read about most of those trips on this blog.  So you see, without Robin’s original dream, neither of us would have ever learned to ride, and this blog would have never had a reason to be.

And this story, I think, speaks to one of the really important lessons of Robin’s life — the importance of experiences.  She wanted to ride, to have that experience, and she kept at it for years until she was able to do it.  And then, there was no place that she wouldn’t ride, whether it was the freeways into Montreal at dusk in the rain (I was terrified!) or the legendary Cabot Trail on Cape Breton Island, Nova Scotia.  She took whitewater canoe trips down all the iconic waterways of Maine, from the Allagash to the St. Croix to the Fish River Chain to the West Branch of the Penobscot and more.  In her 50s, she decided to take viola lessons and became quite a capable player (her teacher, in fact, honored us by playing at the funeral).  After spending several summers traipsing after me on the golf course, at age 58 she got some clubs, took some lessons and fell in love with the game herself, even joining the ladies’ league at our local course.  She left a steady, dependable job to strike out on her own and start her own practice in marriage therapy, with no income guaranteed — and built her practice to the point that she needed a waiting list to keep up with the demand.  That was Robin — fearless in the pursuit of new experiences, at every stage of her life.  In fact, in one of the first demonstrations of this spirit, when she graduated from college at age 22 she moved to Maine, no job in hand, just to be with me — somehow, she always had faith that whatever she did, it would be okay and she would make it work out.  She always chose experience over fear, and never let doubt stand in her way. 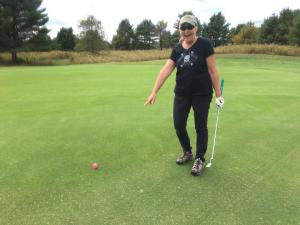 From all accounts, including those of clients who revealed themselves to me at the funeral (Robin NEVER broke a confidentiality in all the years of her career), she was a brilliant marriage counselor.  I can personally attest to the fact that Robin had a genius for seeing the energies in relationships, in a way that always left me astounded at the depth of her insight in this regard (I, if anything, am seriously handicapped in this respect if not altogether useless).  And, just for any who might find this information of value, I remember that one of her mantras was “five to one” — meaning that, for every negative interaction in a relationship, there needed to be at least five positive interactions if the relationship was to last.  She also spoke often of “protect mode”, the defensive posture that we all fall into sometimes, which triggers our adrenaline, “fight or flight” response and makes it impossible to reason or logic — two skills of critical importance to the working out of differences in a relationship.  So, dear reader, if you can cultivate the “five to one” mindset, and be wary of “protect mode” in yourself and your significant other, you may be lucky enough to enjoy the kind of marriage that we did — and if you are even half as successful as we were, yours will be a happy marriage indeed.

Our daughter LJ also pointed out that Robin had a knack for balance.  She somehow balanced career and motherhood, a professional life and a personal one, with work and recreation and family all flowing seamlessly together for her, a rare accomplishment in this age.  Again, while never impulsive, once Robin had weighed the options and determined a path, she never let fear or doubt stand in her way; I envy her that, and hope to live by her example in this regard.

I don’t know what else to say.  There’s no way that I can sum up such a beautiful spirit no matter how much I write, and certainly not within the limited confines of this unworthy space.  I miss her terribly.  It’s been five months since her heart gave out.  Our home, my work, all that we knew and enjoyed together, now constitute alien landscapes for me, barren and silent and empty without her.  Friends and family have been wonderful and I am beyond grateful for their support; but I struggle with the future, as all the things that I liked to do, including riding, were things that we did together, and I see no joy in doing them alone.

Yet God certainly had plenty of opportunities to take us together, either on a scooter trip or a whitewater river or wherever, but for some unknown reason He took her early and left me here alone.  So what else can I do?  I will keep putting one foot in front of the other, breathing in and breathing out, until either some new purpose reveals itself or I can be with Robin again.  And, as my good friend and scooter buddy Francis put it, she’s OK since she’s with God; so I might as well enjoy the time remaining to me as best I can.  And I keep reminding myself that the last thing Robin would want is for me to remain indefinitely disconsolate and bereft, though that seems at this point to be a very viable option nonetheless.

So, knowing no other way than the way that brought me here, I will continue to ride.  I still want to complete the “Four Corners of Maine” tour we started in Lubec last fall, and I would like to ride north to Aroostook County and re-visit some of the sights and places where Robin and I first embarked on married life.  A colleague is moving to Vermont and has invited me to visit, and though I have often ridden on Mt. Desert Island and Acadia National Park, I have yet to blog about it for you, despite the fact that the Park Loop Road is one of the finest motorbike roads in the east.  And my new Suzuki is big enough that there is no road it cannot handle; if I wanted to do so, I could ride clear across America on that thing.  So there is much that I yet can do.

At this point, I see no other way forward except that I will continue to go through the motions until, as the psalmist put it, I am led once again to green pastures.  I will attempt, in the way that Robin always lived, to put experiences over fear and doubt, balance work and home and recreation and all of life as best I can, and go and do all the “bucket list” things I can do while I am still able. 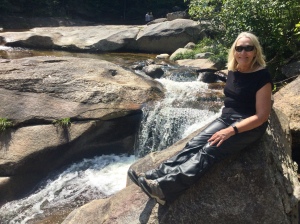 I thank you for sharing this reminiscence of Robin with me.  It nowhere near does her justice, I knew it couldn’t when I started; but it was a labor of love, it needed doing somehow, and I’m glad it’s done.  I hope she approves.