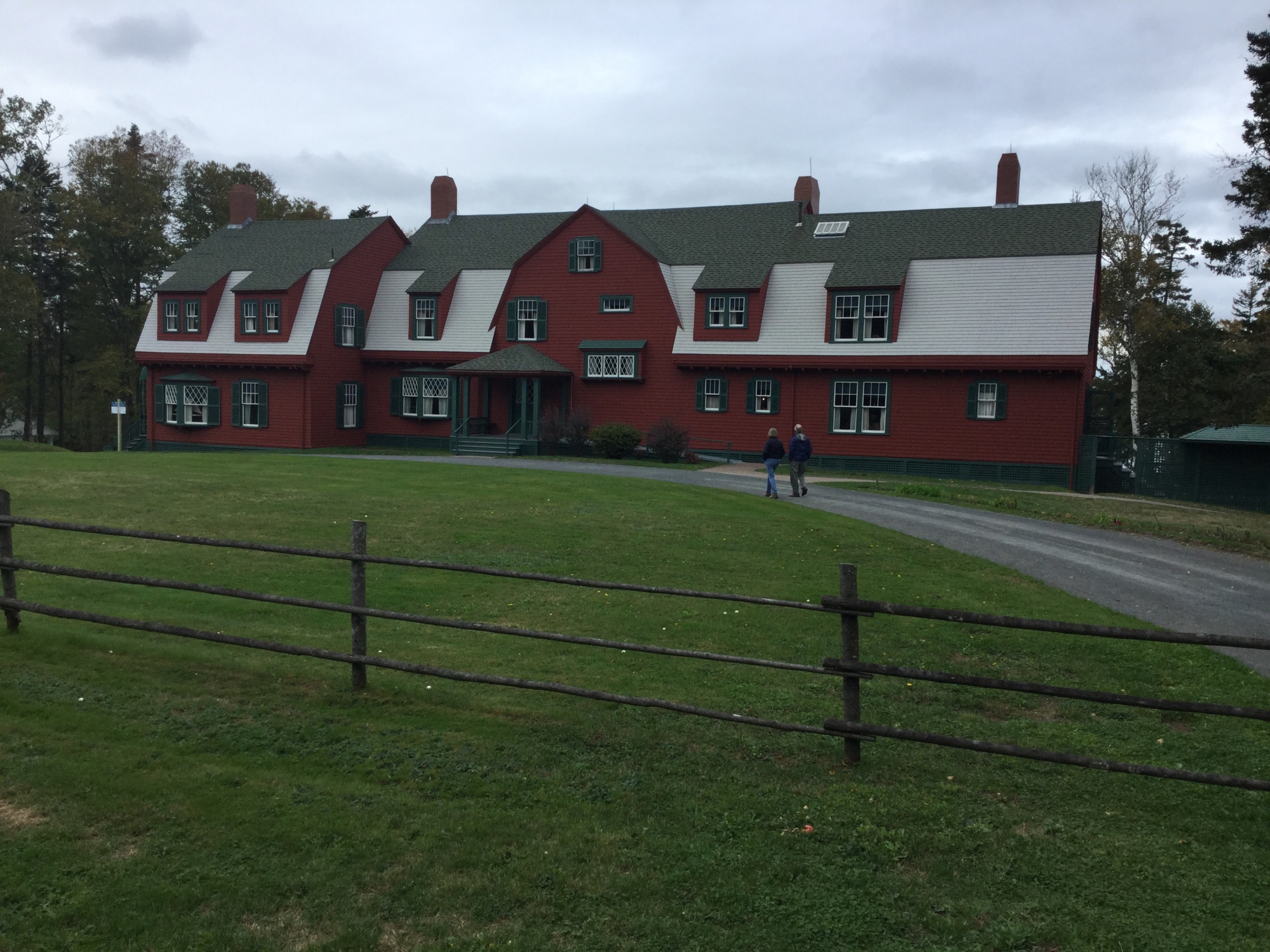 About two miles across the international bridge from Lubec is Campobello Island, on which is the summer “cottage” which belonged to the presidential Roosevelt family, now an international park (the only such park in the world!).  Franklin Roosevelt (and later Eleanor and their children) spent summers there from the time that Franklin was a baby, from the early 1900s until World War II, and the visitor center documents the Roosevelts’ life and the lifelong connection they shared with Campobello.

We arrived at Campobello just in time for “Tea With Eleanor”, a fascinating and engaging presentation on the life of Eleanor Roosevelt.  Apparently a few years back, the guides at the park felt that the presentations there gave Eleanor short shrift, and advocated for her to have a greater presence; “Tea With Eleanor” gives some fascinating insights into Eleanor and certainly expanded my appreciation for this remarkable American woman.  Apparently Eleanor always served her guests tea and ginger cookies, and that is exactly what accompanies this presentation — the cookies are freshly baked right there!

I of course knew of Eleanor Roosevelt, but until today had no idea what a force she had been for human rights in the world.  Two “for instances”: she had been instrumental in the formation of the famed Tuskegee Airmen, the African-American aviators who, amidst overwhelming prejudice,  changed the course of the Second World War; and, as America’s ambassador to the United Nations (one of Franklin’s enduring legacies), she chaired the committee which authored the UN’s Universal Declaration of Human Rights.

All of the buildings at the park, while originally built during the period when Franklin’s parents built their first Campobello cottage, have been refurbished with period decorations and furnished with original or period pieces.  Here is the building now used for “Tea With Eleanor”: 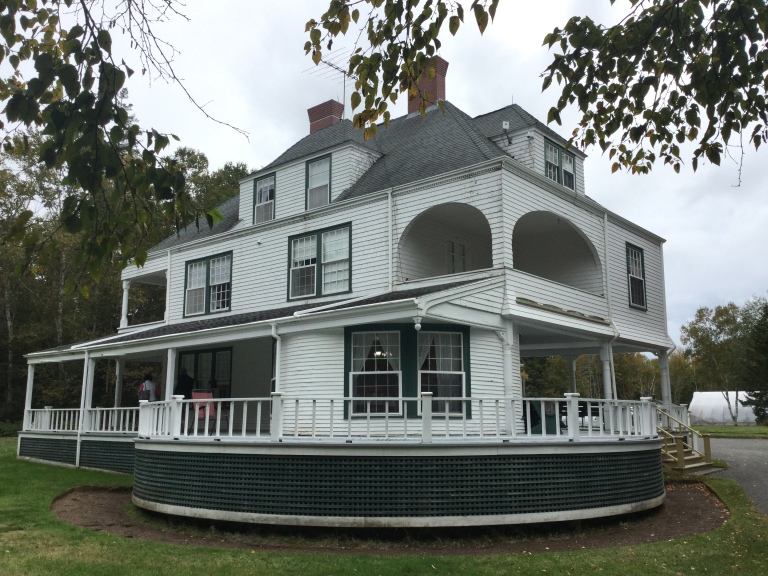 Here is a view of the “tea room” and our table setting (note the tea and cookies!): 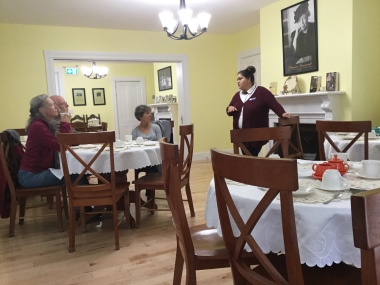 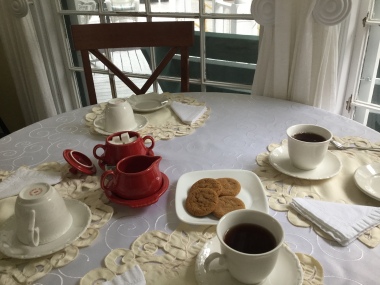 The presenter was outstanding, knowledgeable and engaging, and augmented the lecture with a number of fascinating old photos of Eleanor and the Roosevelts.

The Roosevelt “cottage” has 32 rooms and a guided tour takes you through the first and second floor, where you can see the bedrooms, kitchen, bathrooms, living room, and essentially all of the spaces where the Roosevelts lived and played during July and August of every summer from 1900 through 1939. 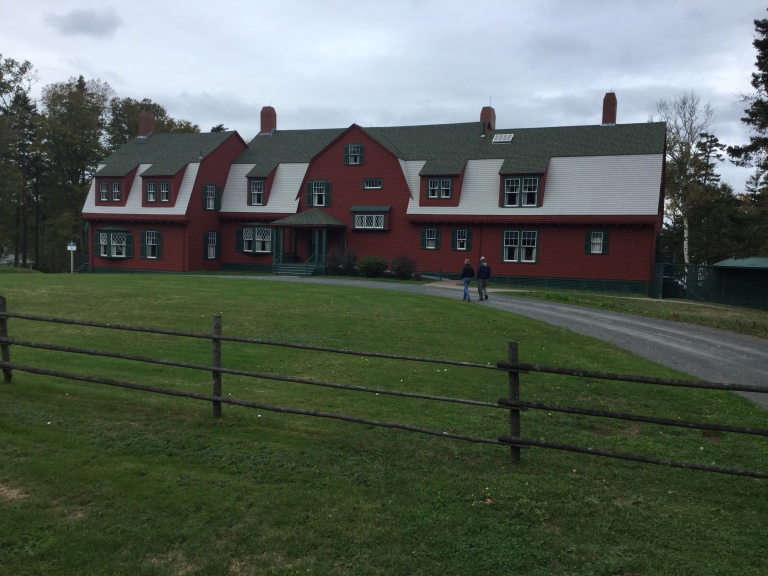 Some “cottage”, huh?!  Here are some photos of the interior; I was especially interested in the telescope but it appears that it was not of famous manufacture (I was hoping it was an Alvan Clark).  Apparently FDR never looked at the stars with it but routinely viewed the boats in the bay. 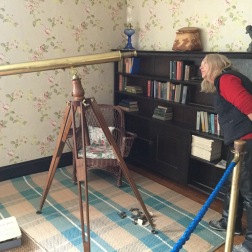 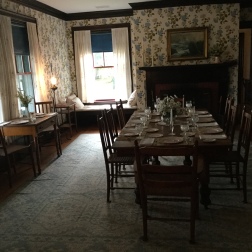 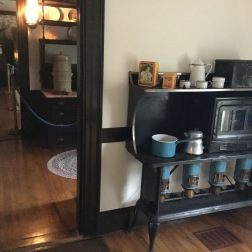 I could have taken a hundred photos of the place, filled as it is with period products, utensils and furniture.  The table setting in the dining room photo is Eleanor’s china; FDR’s signature hat and pipe lie on the table in the anteroom; period children’s toys are scattered through the kids’ bedrooms; etc., etc.

We finished the tour, then had a marvelous lunch in the Pierce Cottage on the park grounds.  Here are a few more photos, including the view from the front of the Roosevelt cottage overlooking the water. 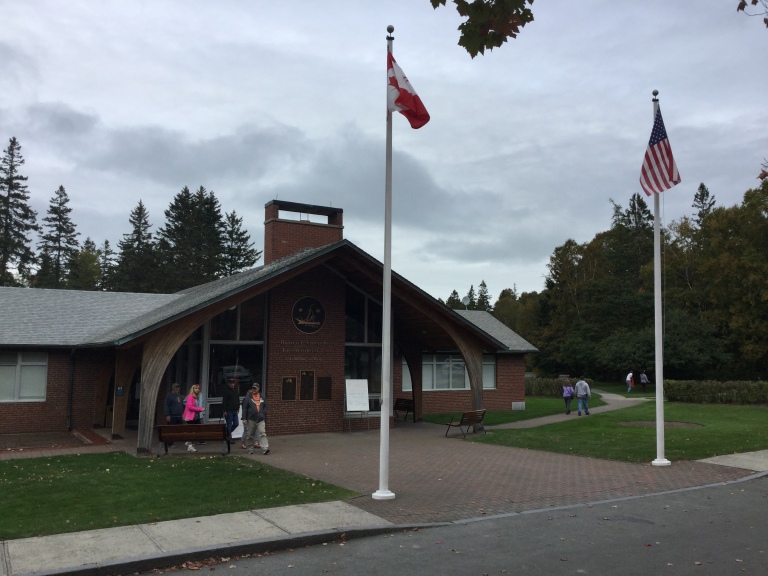 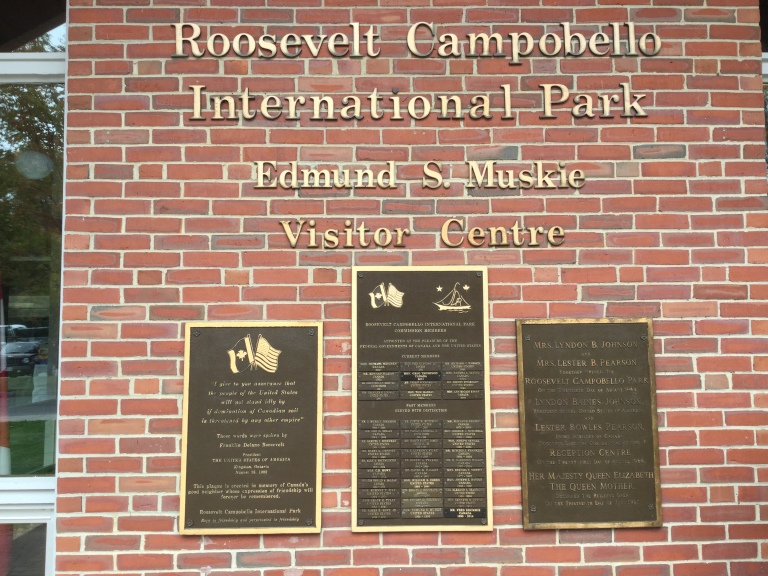 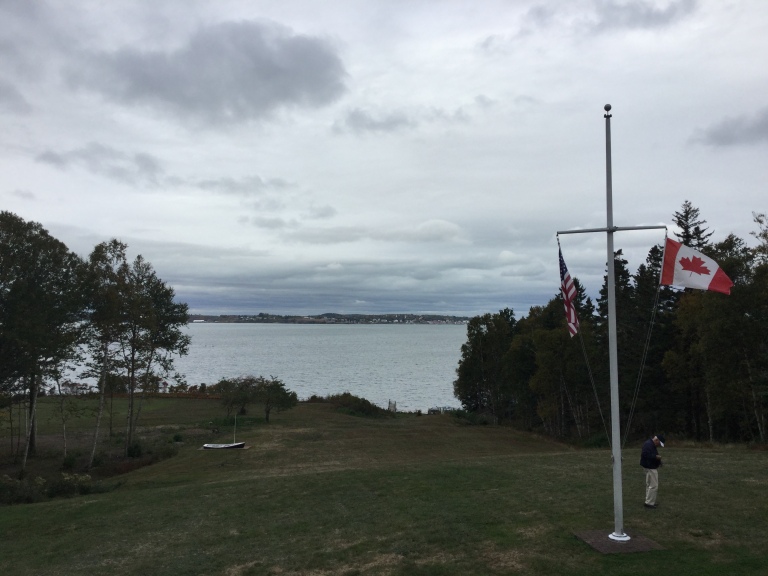 We left the park at about 2PM and went to the Lubec Post Office to document our stop for the “Four Corners of Maine” tour.  The rules require you to appear in a photo in front of the corner’s distinguishing landmark (in this case, the post office), in front of your ride and holding a handmade sign indicating which tour you are making (for us, a “1”, as this is our first attempt at the tour): 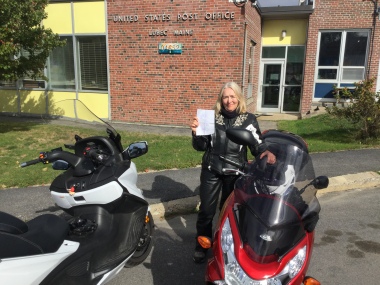 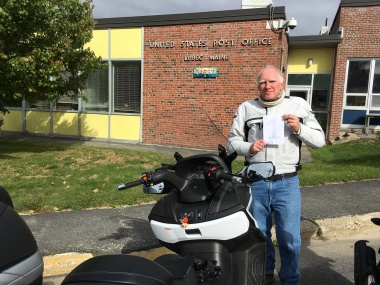 We followed this with a much-needed gas stop, obtaining the gas receipt to prove we were in Lubec, and then headed south to West Quoddy Head and Quoddy Head State Park. 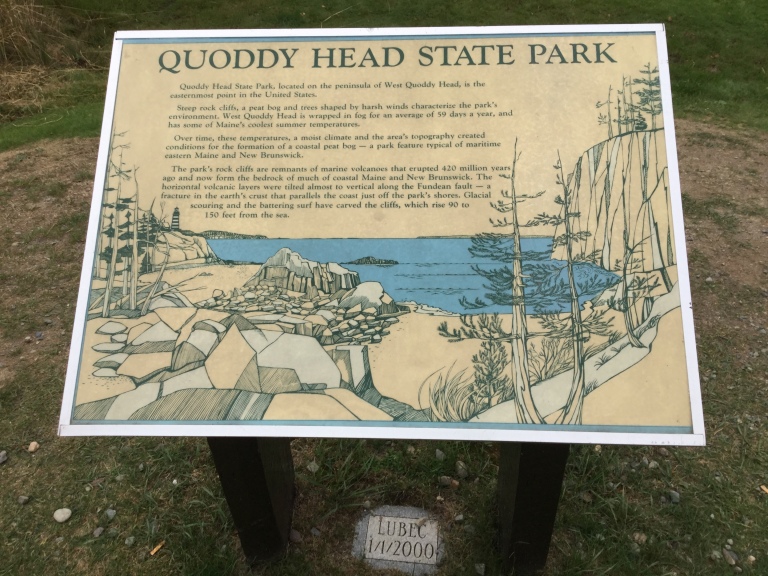 Here are some views of the iconic Quoddy Head Light, located on the very easternmost point of the United States: 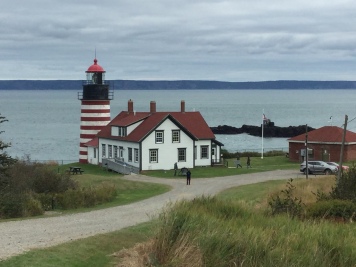 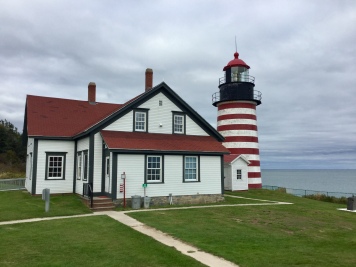 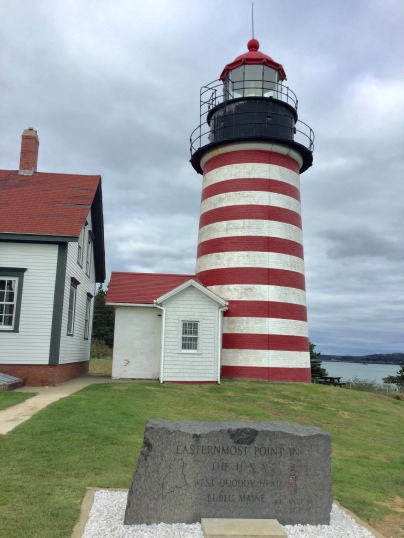 There is a spectacular hiking trail along the cliffs here which I would encourage every visitor to take. 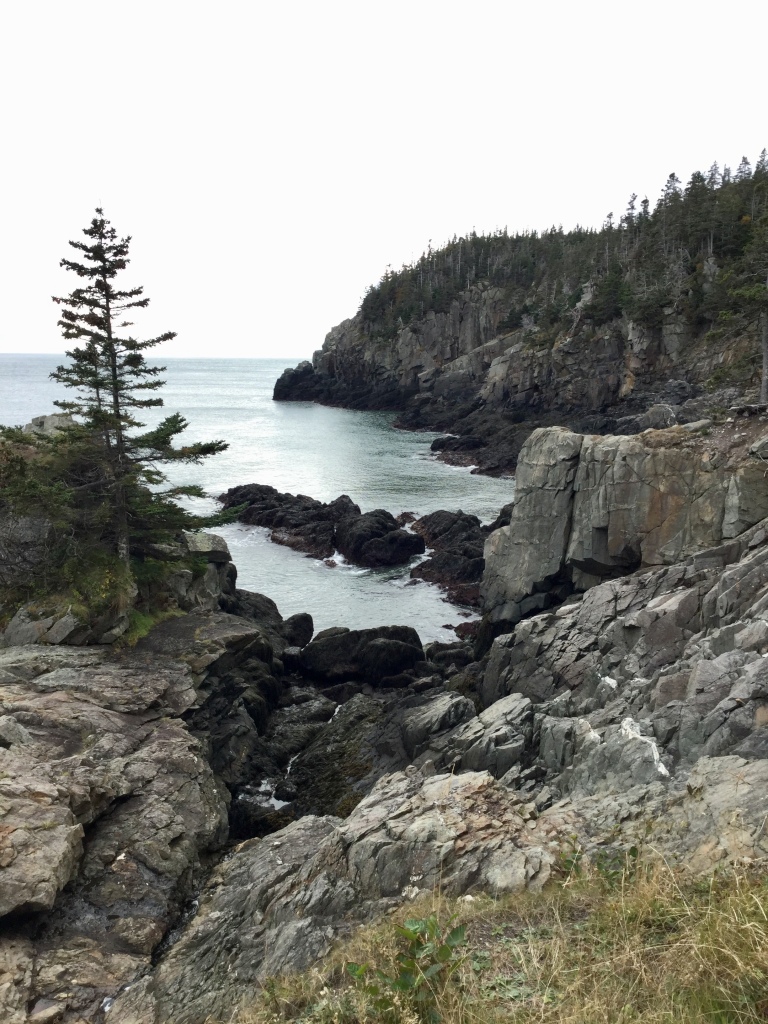 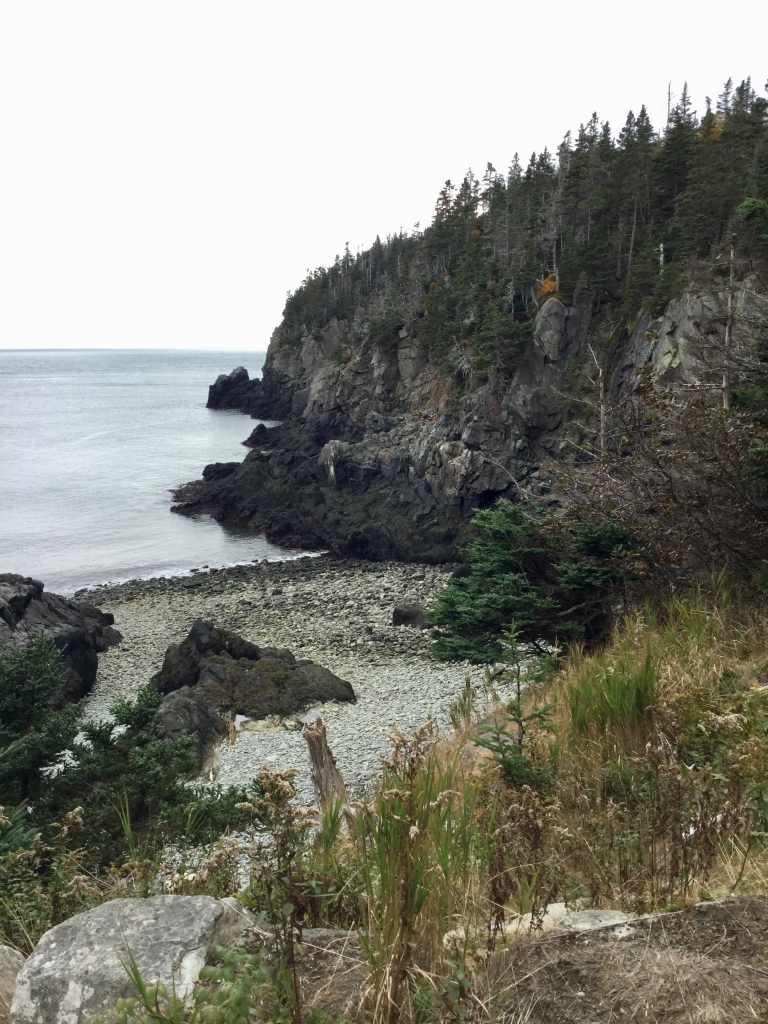 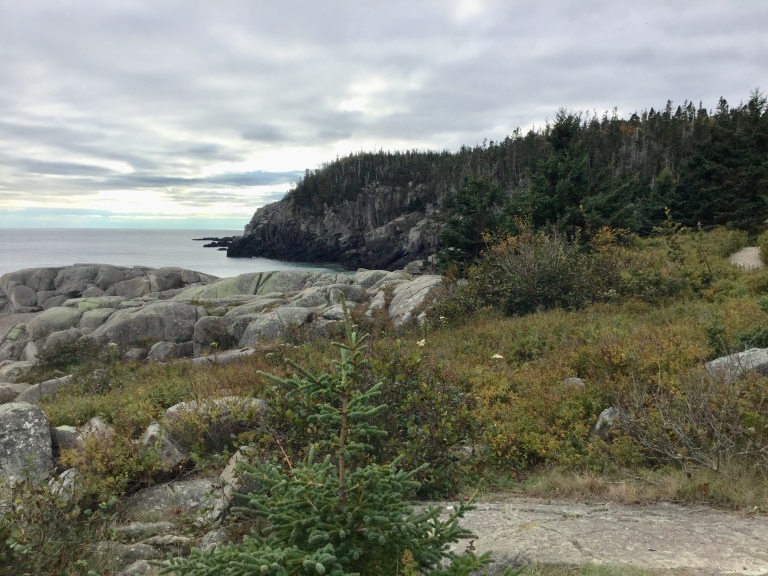 Someone had left this exquisitely painted stone just off the path.  I was tempted to take it but then decided I would leave it for others to enjoy, and took only this photo instead: 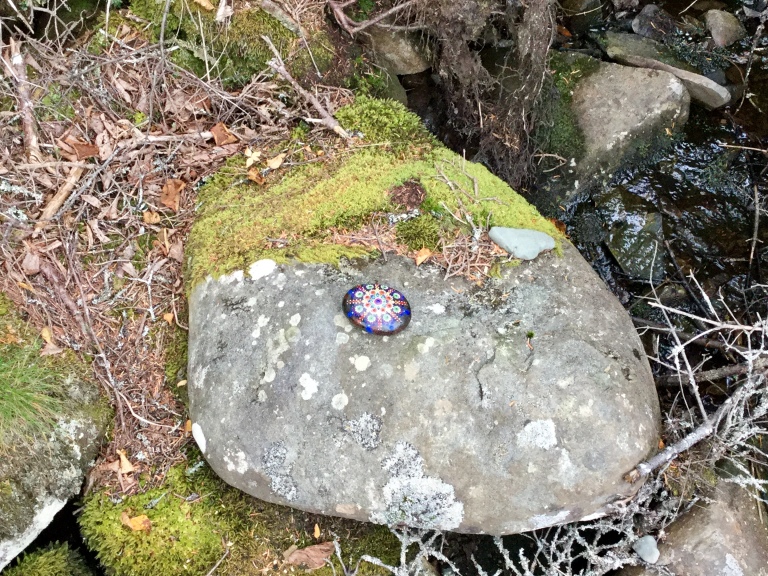 I believe the views along here rival those at Acadia National Park.  We saw a minke whale in the water just off Gulliver’s Hole along the trail but could not capture it with a photo.  But we have been here on a sunny day and in good weather, the views are just breathtaking.  Not bad on a cloudy day like today, either: 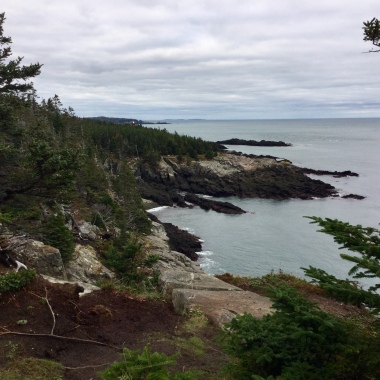 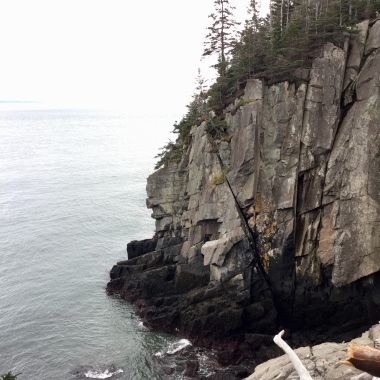 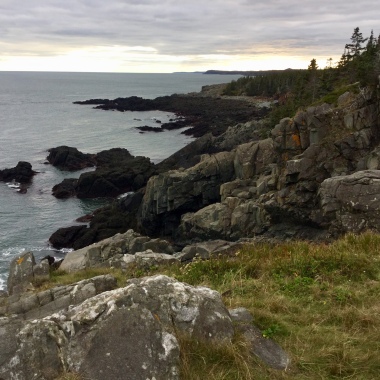 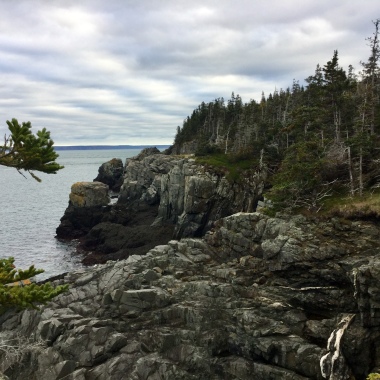 The trail north from the lighthouse ends on a viewing platform overlooking the town of Lubec: 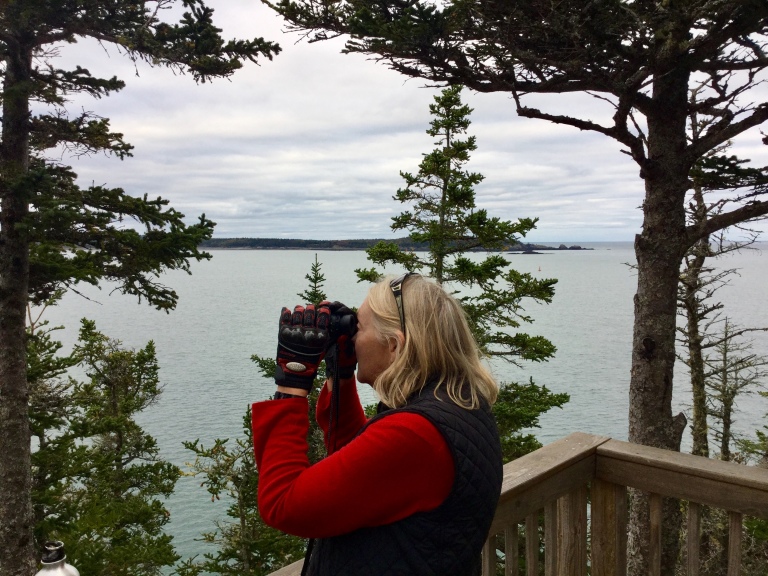 From here, we hiked back to the lighthouse and rode back into town just as dusk was beginning to settle over Cobscook Bay, grateful for the opportunity to visit these iconic destinations on the easternmost corner of Maine.

Most people who would follow this site already know as much about me as they care to know; but for those who stumbled onto this blog, since 2013 I have ridden a Vespa 300 GTSie Super, and now a Suzuki Burgman 650, around the northeastern U.S. and maritime Canada. The purpose of this blog is to share those trips with interested family and friends. View all posts by John Neal