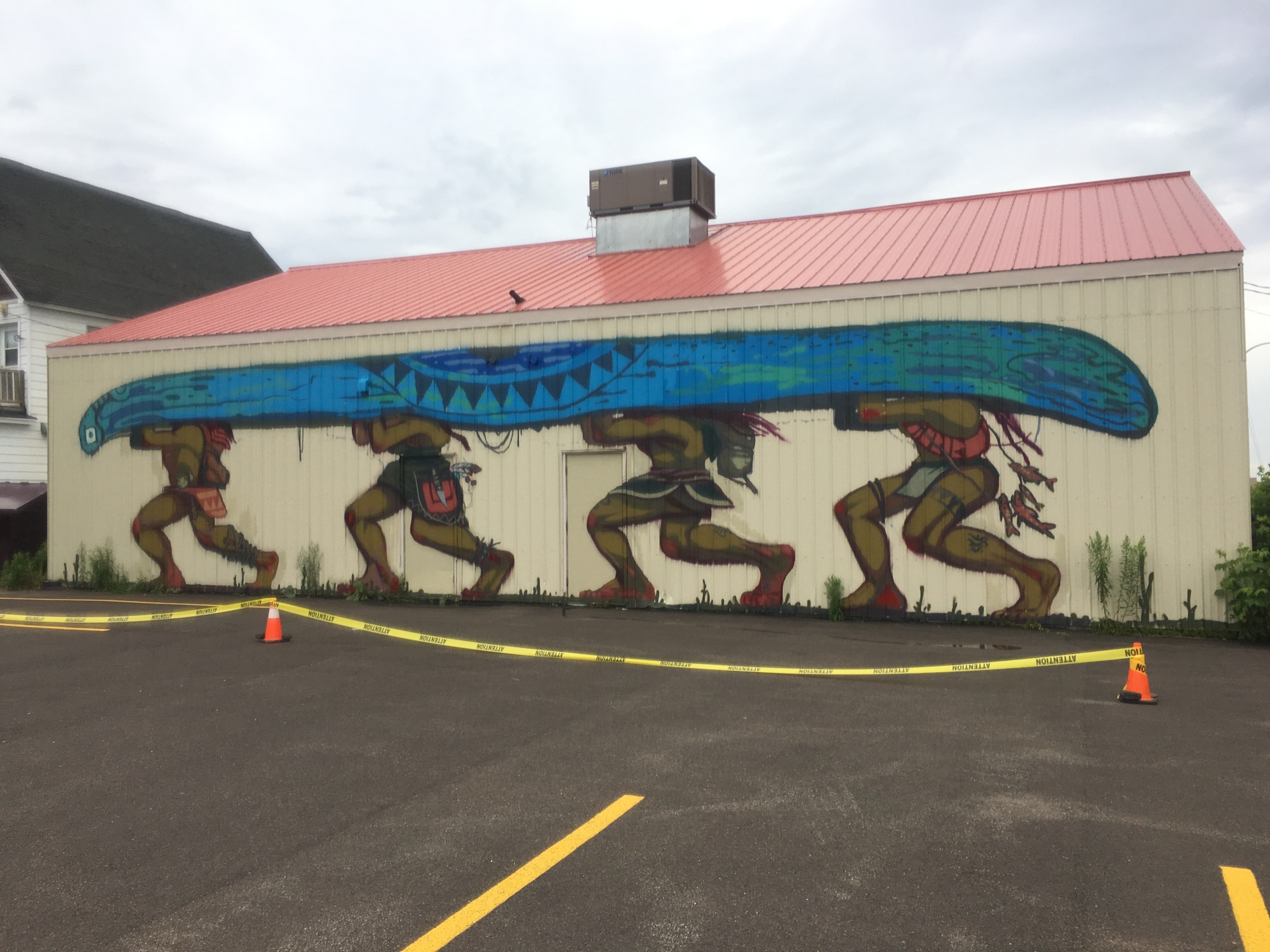 As you may recall, we spent Wednesday and Thursday in Moncton, waiting for the “overnighted” drive belt to arrive at Adriaan’s Cycle Shop so they could repair the Vespa and we could go home.  By Friday afternoon it had became clear that the belt would not arrive that week, we had no idea when it would arrive, and knowing that nobody would be working or delivering anything on the weekend, we decided to rent a car and head for home.

It was interesting to discover that one cannot transport a rental car across the international border.  We originally thought the Budget rental car guy was telling us that we could not even take a car across the border, a stressful moment as the only other alternative was to rent a U-Haul trailer for over $800.  But then we realized that he was only saying that we could not drop off a Canadian rental car in the USA — we could drive it home, but we would have to return it to Moncton. I’m not sure why that is, but at any rate we rented a car for a week after receiving Adriaan’s assurance that he would store the Vespa until the belt arrived, whereupon he would phone us and I would return to ride the Vespa home when it was fixed.  So on Friday afternoon, we set out for home, me in the rental car and Robin on her Honda scooter (which, by the way, ran flawlessly for the entire trip).

We decided to take NB-1 home through St. John, having arrived in Moncton via NB-2 and Fredericton — and we liked that route much better.  Not only was it a better road, but it seemed to us to be a shorter trip.  The only issues on that road center on St. John; it is a major city with a lot of interchanges on that road, and the coastal fog was pretty bad.  But even with that, we would recommend anyone going east to PEI from Maine to use NB-1.

By the time we reached Calais, Maine, it was supper time and we were ready to stop. So we took a room at the International Motel (the other option!) and finished the trip home Saturday, without incident.  I don’t think I was ever so happy to get home!

We enjoyed the weekend and then received a phone call from Lorraine at Adriaan’s that the belt had arrived Monday morning, they had installed it, and the Vespa was ready to ride home.  Consequently, two days later I drove the rental car back to Moncton.

That evening in Moncton I noticed that there was a group of young people across the street from the hotel, paint cans all over the parking lot there, apparently painting graffiti on a nearby warehouse.  While this seemed somewhat concerning to me, upon reflection it seemed that it was quite a large group of people to be a random vandal situation, they also were using a parked school bus as an apparent base of operations, and nobody seemed unduly alarmed about their activity.  So I shrugged it off and went to bed (not that there was much I could do about it anyway).

The next morning, as I walked to Adriaan’s to square up with them and collect the Vespa, I saw this: 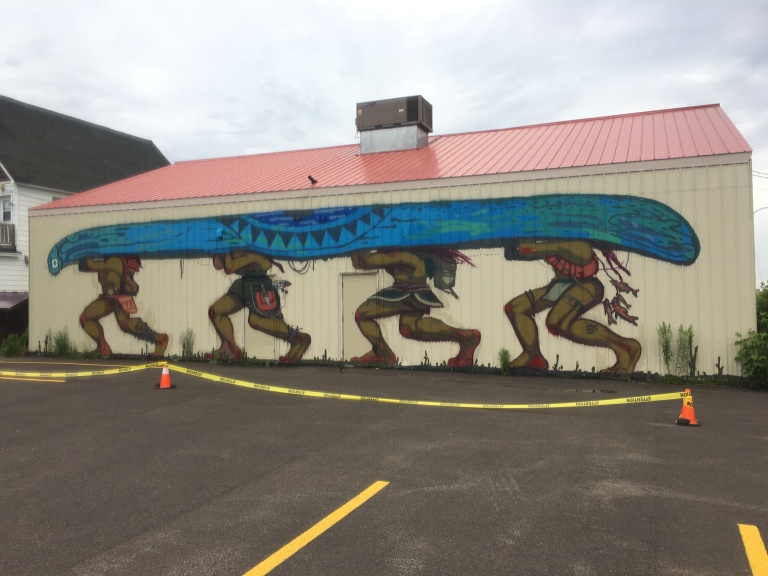 Pretty nice graffiti, I thought!  I take it to be a celebration of Micmac First Nation heritage, a common theme in that part of New Brunswick.

I cannot, by the way, say enough good things about Adriaan’s Cycle Shop and the kindness extended to us by Adriaan, son Charlie and wife Lorraine.  Not only did they repair the Vespa when no other Moncton motorcycle shops would even look at it, they stored the bike for me, without charge, for a week.  I encourage anyone needing motorbike service in the Moncton area to visit their shop.  And for just over $100 USD, I was on my way home, once again astride the Vespa.

Here’s an interesting aside.  When I arrived at Adriaan’s that morning, Charlie told me that the “Vespa” drive belt which we had ordered from Brunswick, Maine was nothing more than a generic lawn-and-garden tractor belt available at any home store.  In other words, had we known this (and had Trisports told me this), we could have skipped the whole “overnighting”, waiting for the belt to clear Customs, and spending three additional expensive nights in a hotel — and been on our way the very next day!  Charlie gave me the sleeve in which the belt had shipped so I could reference it the next time I needed a drive belt.

Anyway, at that point I rode 361 miles home in one day, something I take a bit of pride in, even though I recognize it doesn’t exactly qualify me for “Iron Butt” status.  And the Vespa ran flawlessly, just as Adriaan said it would.

So I have mixed feelings about this entire trip.  On the one hand, PEI is a lovely place and I’m very glad to have visited there again, and to have done so on the scooters.  It is ideally suited to leisurely scooter travel and we truly enjoyed riding there, especially through the National Park.  But I feel myself also to have received a stark reminder of the inherent dangers of two-wheeled travel, and my faith in the Vespa has been badly shaken as well.  Already prone to anxiety, this trip has given me additional reasons to hesitate at the prospect of another long scooter ride.

I also feel that while it was great fun to ride in PEI, it was not particularly fun to ride to PEI.  This represents a change of heart for me, one which (incidentally) Robin does not share.  She enjoyed the entire trip, Maine to PEI and back, breakdowns and all.  I am left thinking about buying a pickup truck with a scooter trailer, traveling to a scooter destination in air-conditioned comfort, immune from wind and rain, and then enjoying day trips on the bikes once we arrive.

But I do know this: one cannot live in fear of the bad things that might happen, or else one never really lives at all.  This is, in a nutshell, the Biblical parable of the talents.  And I can remember my grandmother, Nanny Murphy, talking about her husband; he was the son of Irish immigrants and grew up listening enraptured to the tales of the beautiful Irish homeland which his parents told.  He always wanted to go there and see those beautiful places for himself — but there was never enough money for that sort of “luxury”, and by the time that he actually could afford such a trip, his health had declined to the point that it was no longer possible.  And so he died, never having had the opportunity to visit his ancestral homeland.  I can still remember Nanny looking me in the eye and saying, “Go while you’re young!  Even if you have to hire the money!” — her colloquial way of saying if there’s something you want to do, or someplace you want to go, do it — go — even if you have to take out a loan to make it happen.

And I take that to heart.  Which means that despite the problems and hazards we faced on this PEI trip, there will be more trips.  I’m looking at buying a heavier, more powerful scooter, more stable at highway speeds and better able to manage the interstates and the Transcanada.  And I know I’ll spend the winter dreaming of cool places to ride, even though I am sobered by the knowledge of the risks inherent in the undertaking.  Because, in the final analysis, a life lived at home, afraid of what might happen, is to me no life at all.