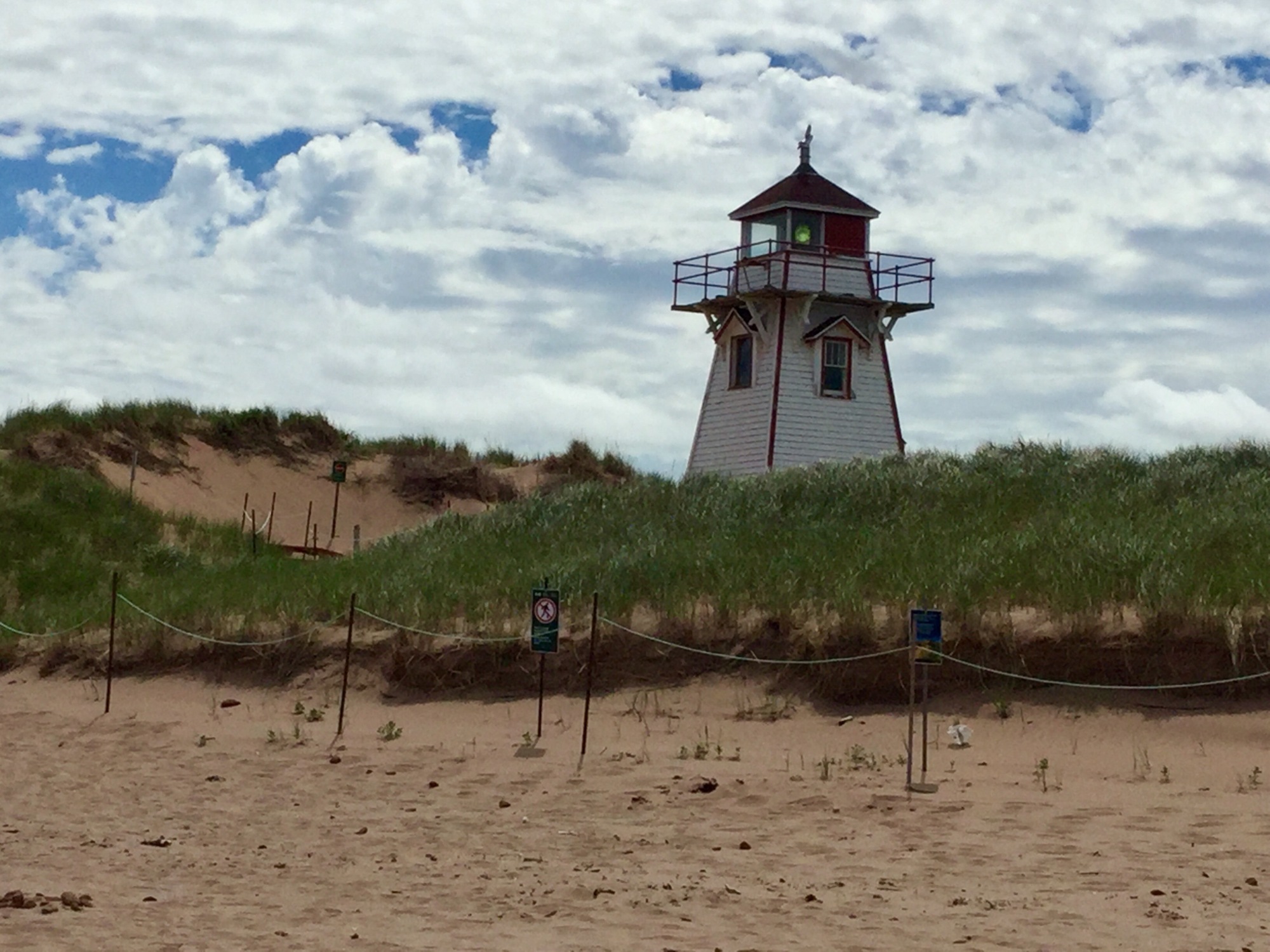 We spent last night at Northwind B&B in Oyster Bed Bridge with superb hosts Vaunda and Martin Vanderaa (he is of Dutch ancestry, it turns out). They proved themselves excellent hosts indeed as we inadvertently left behind a windbreaker in our room, and Vaunda offered to bring it to us in Charlottetown tomorrow!  As is our custom, we enjoyed a great breakfast and then, given that it takes us about an hour to pack up and load the bikes, we left shortly after 10AM and headed for Prince Edward Island National Park.

With regard to the National Park, I believe I was in error in my last post, and I am going to try to go back and edit it if I can.  There are actually three sections to the park — the western section, near Cavendish; the central section, near Brackley and Dalvay, and an eastern section, which we did not visit, near Greenwich.  Apparently the eastern park features long boardwalks over the dunes and water, and would doubtless be worth a visit, but we had an agenda today and did not have time to go there.

The central section of the park offers about six miles of continuous beach bordered by lovely, grass-covered sand dunes.  Here are some views: 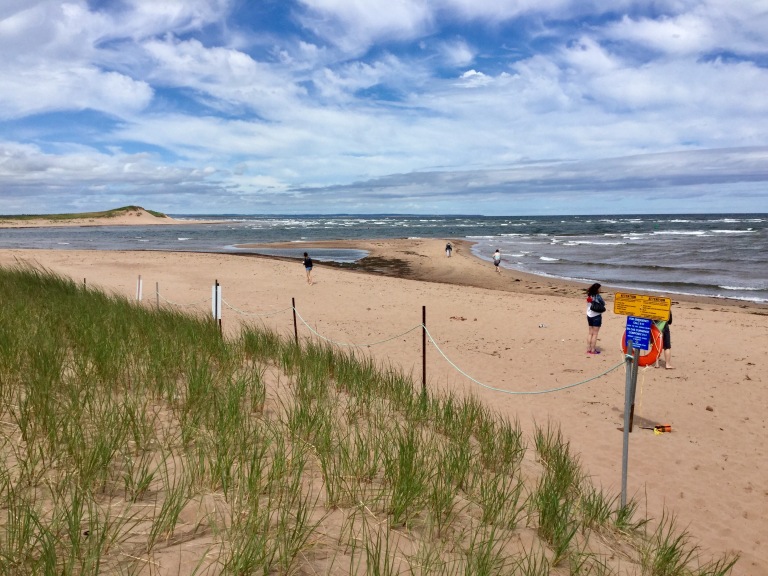 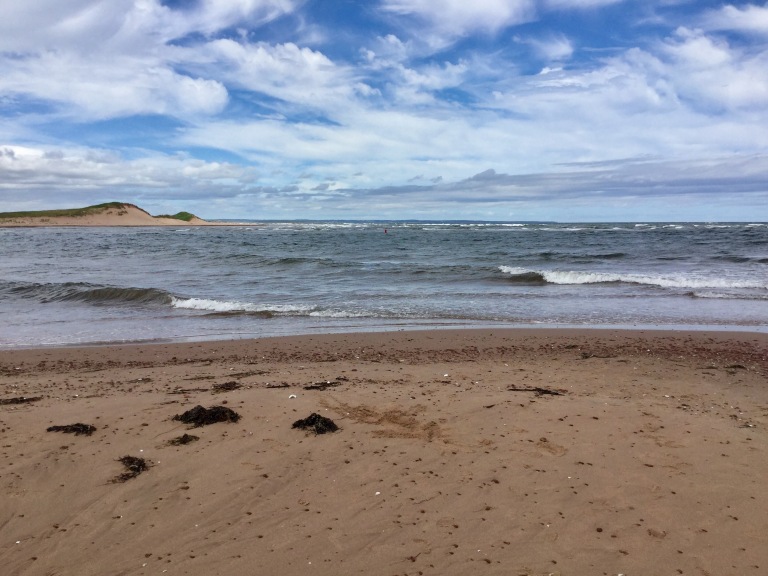 A small lighthouse stands watch here amid the dunes: 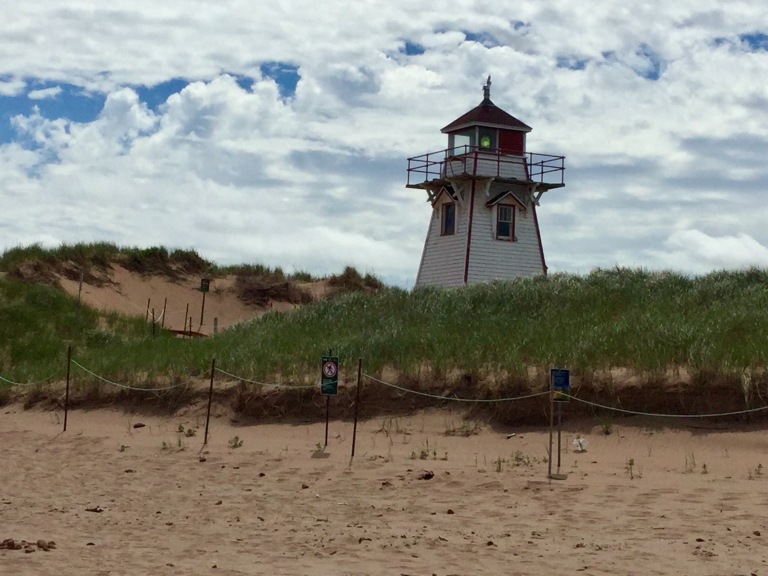 This plaque adorns the eastern wall of the lighthouse:

This park is about big, open vistas of surf, sand dunes, beaches, wind and sky.  Again, it really reminds us of Popham Beach in Maine, but on a much grander scale.  I am always grateful for the foresight and generosity of those who preserved places like this for all of us to enjoy.

From the national park we headed east on PEI-2 to Souris, about an hour’s ride, the goal being to visit the “singing sands” at Basin Head Beach on the eastern shore.  Apparently this beach was once voted (by somebody) as the best in all of Canada, and it certainly is a fine beach, distinguished from all the others on PEI by its white (not red) sand.  It is a unique set-up, though — you approach the beach via a warren of boardwalks which take you through an area of gift shops and concession stands, past fully-enclosed picnic shelters (really, a picnic table inside a roofed cabin!), and over the outlet of a river, where a diligent collegiate-aged lifeguard was watching young and old jump the ten feet off the boardwalk and into the river which empties here into the sea.  We were impressed by this, as today was by no means a “beach day” by our standards — about 65F with a stiff gale blowing and more clouds than sun by a long shot. 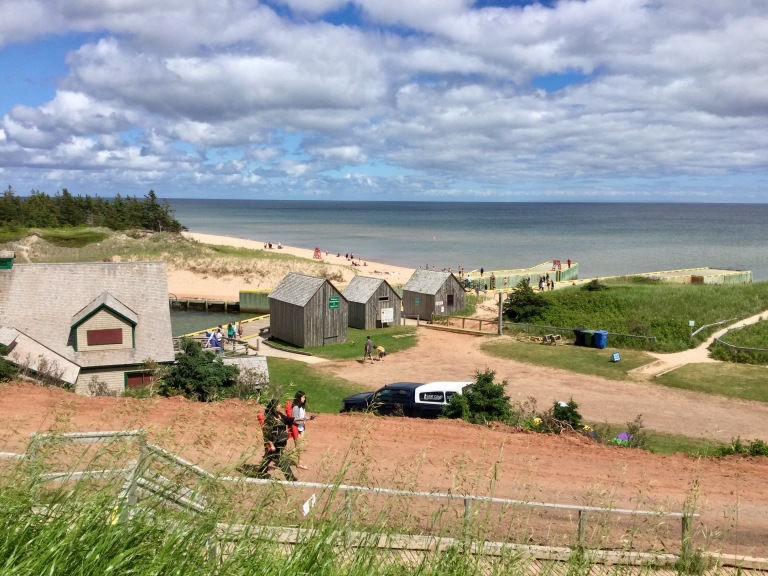 This is a view of the Basin Head complex from the parking lot; you can just see the boardwalk to the left of the center buildings, along with the two piers that extend into the ocean.  The beach looks like this, from either side of the piers: 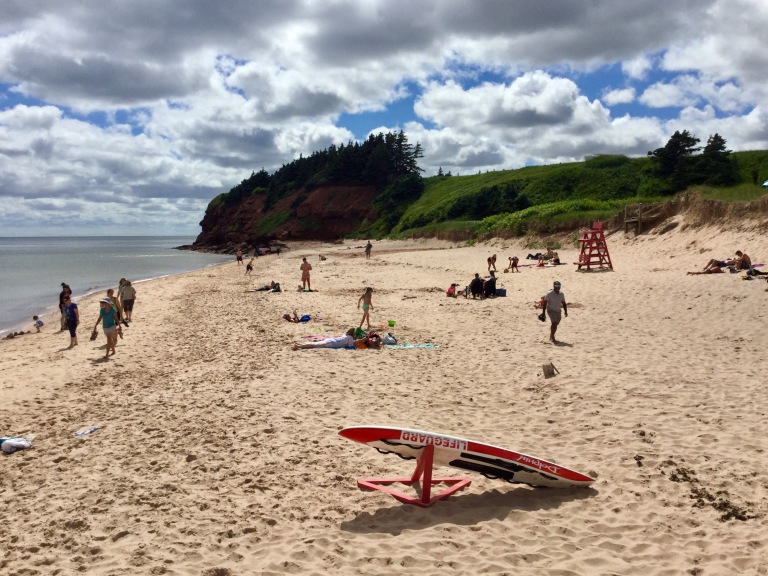 The “singing sands”, however, were apparently off on their union break, because all we heard were the usual sounds of water lapping the shore.  This beach is also noteworthy for the extremely gradual gradient with which it enters the water; an average person would have to walk a long way out from shore to get wet up to their neck, so this would be an outstanding beach for people with small children.

The last stop on today’s itinerary was East Point, the very northeastern tip of PEI, where the waters of the Northumberland Strait can be seen mingling with the waters of the Gulf of St. Lawrence.  There is a scenic lighthouse there along with the usual gift shop and concession stand:

Robin is the Kilroy-like figure on the observation deck at the right.  And our PEI itinerary is now complete, because we have scootered from North Cape on the very western side of PEI, to East Point on the east, and every place in between!  When we finished taking pictures here, we hopped back on the bikes and took PEI-2 all the way to Charlottetown, where we found a reasonably-priced hotel room in preparation for Robin’s conference here tomorrow.

Tonight we secured tomorrow’s reservations in Harvey, New Brunswick, halfway between Hopewell Rocks and Fundy National Park.  The plan is to ride back to Borden-Carleton after Robin’s conference, cross the Confederation Bridge (toll leaving the island is $18.50 CAD for motorbikes), return to Moncton, NB and then head south to Harvey.  We’ll let you know how it goes!