A couple of weekends ago we decided to make a day trip to Rockland, Maine and check out the museums. With gray skies and the threat of rain ever-present, we loaded the raingear into the topboxes and headed up US202 to Augusta, negotiating the rotaries to ME-9 and then, shortly thereafter, to ME-17, which we followed east to Rockland.  Thankfully the rain held off until about five miles out of Rockland, where we began our day at the Farnsworth Art Museum.  Rockland is home to a number of interesting shops and restaurants and could easily occupy us for a weekend or more, but this trip was all about the museums.

The Farnsworth houses one of the best collections of works by the Wyeth family — grandfather NC Wyeth, son Andrew Wyeth, and grandson Jamie Wyeth, along with an excellent assortment of twentieth-century American painters.  While each work had an obligatory card posted near it to identify and explain it, I found it curious that these cards appeared to be written, not by the museum curator or other expert, but rather by whomever it was that donated the work to the museum.  While this gave great insight into works donated by the artists themselves, some of the cards seemed really random to me, and the authorship often was unstated.  So this added an element of oddity and unpredictability to an otherwise staid morning.  I regret that I have no photos of the Farnsworth to share, but they frown on picture-taking within the museum.

On the other hand, the Owl’s Head Transportation Museum, just two miles outside of Rockland, welcomed photographers, and offered us free admission on account of the fact that the facility had hosted an event the previous evening and some of the displays had not yet been reassembled.  This is a wonderful museum filled with early incarnations of automobiles and motorcycles, many of them in showroom mint condition.  Take this early Harley-Davidson, for example…. 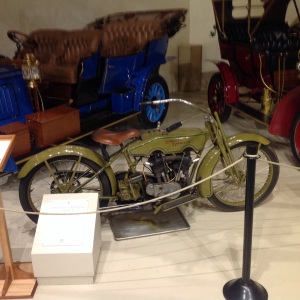 Here’s another view, taken from behind the bike…..

As you can see, old cars compete for space with old motorcycles and old planes!  Robin, who was very reluctant to visit this museum (“old cars are boring”) and only did so because our friends wanted to see it, was completely enthralled.

They have a replica of the Wright Brothers’ original plane:

If you look closely beyond the plane is a Gemini space capsule, an interesting juxtaposition and remarkable in that only sixty years of aviation history separates the two.  Farther beyond the photo is a marker which measures the distance of the Wright brothers’ first flight; at thirty yards, an elementary school quarterback can throw a longer pass.

When I was in college my mother bought this used Peugeot automobile which she loved but which was completely unreliable, leaving her stranded someplace at least monthly.  I remember driving it on the Maine Turnpike and watching as part of the windshield trim blew off.  It was a piece of junk but she loved it, so I took this photo of the first Peugeot for her benefit:

There follows, in no particular order, some noteworthy examples of early motorcycles (this IS a scooter blog, after all!): 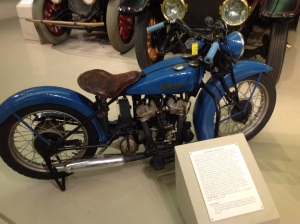 One learns that the early motorcycles were more properly mopeds, bicycles with engines attached.  There are some wonderful early Indian motorcycles here along with vintage Harleys, a BMW with sidecar, some Kawasakis from the 1960s, an old Steffey motorbike and a beautiful Royal Enfield.  And this says nothing about the fabulous old automobiles — Rolls Royces, Packards and Oldsmobiles from the 1920s and more, Ford Model Ts and Model As with other cars from the first years of the twentieth century, and most in absolute mint condition.  All in all, the Owl’s Head Transportation Museum is a “can’t-miss” stop for any aficionado of old cars, bikes and planes.

We left the OHTM in a drizzle and made our way the short distance to the Owl’s Head Lighthouse, located in a lovely oceanside park.  We arrived too late to tour the light (closes at 4PM) but nevertheless enjoyed the quiet and the view.

All in all, a wonderful day in Rockland and a place which I would visit again and again.