Our day began with Doug’s awesome cinnamon-nut omelet; after which we said goodbye to Lyons Cove and made the short ride north to Cape Blomidon itself.  There is apparently a world-famous hiking trail here called “Cape Split”, but since the round-trip hike is a five-hour undertaking, we opted for only a short walk on the beach.

The landscapes here are reminiscent of those of Prince Edward Island with their red sandstone cliffs.

From here we rode #358 south, back to #1.  Heading east, the Evangeline Trail circumnavigates the Minas Basin.  If the Bay of Fundy is shaped like an opened clothespin, the southern side of the pin is the Minas Basin, with Cape Blomidon sticking up into it from Nova Scotia’s north shore.  The feature is named for the anglicized French word meaning “mines”, as there were historically a number of minerals mined here, including gypsum and copper.  This part of the ride, along with the Glooscap Trail (#215, which we picked up in Windsor), was scooter heaven — quality pavement with lots of curves and lovely views appearing regularly oceanside.

Before we left the Evangeline Trail, however, we stopped at Grand Pre to view the memorial to the Acadians, the original french settlers who were forcibly displaced by the English in 1755.  The Acadian memorial is located on land, originally inter-tidal, which the colonial French reclaimed from the ocean using an ingenious system of dikes.  There is an excellent visitor center here which describes the Acadian colony and the circumstances of its founding, its destruction by the British, and its re-establishment years later by Acadians who returned to the land after the French-and-Indian War.  Having lived among the Acadians for five years in northern Maine (they settled along the St. John River, among other places, once forced out of Nova Scotia — in Lousiana, by the way, “Acadian” became “Cajun”),  I found this memorial to be very moving and well worth the time.

We had an anxious half-hour here as, prior to leaving, Robin discovered her passport missing.  A thorough search of pockets and luggage revealed nothing, so she went back into the memorial and re-traced her steps.  Meanwhile, I removed her luggage pack from the bike and finally discovered the passport; she had attempted to put it into the topbox on the back of the bike, but it must have slipped between the box and the cover, because I found it behind the topbox on the seat itself.  Whew!

Anyway, after leaving Grand Pre we joined the Glooscap Trail on #215.  This trail follows the Minas Basin to Truro.  Along the way is Burntcoat Head Provincial Park, home of the highest tides in the world (47 ft.).  We lucked out because the tide was out when we arrived.  This meant that we could actually walk down on the ocean floor!  Check out these photos: 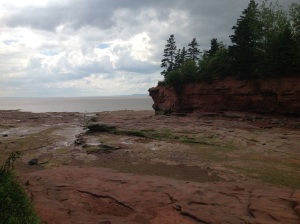 Our goal for the day was to visit all of these landmarks, and still make it to New Glasgow, about 2/3 of the way to Cape Breton Island.  I was excited to be pulling into NG around suppertime, especially because there was a dearth of gas stations between Truro and New Glasgow, and also because we had to spend a lot of time on the highway, since the “old road” (our preferred route, #4) was occasionally superseded by the Trans-Canada Highway, #104, leaving us no option but to ride it at 70MPH and hang on for dear life.  So, it was a relief to reach New Glasgow, except that all the hotels were full as dark was pulling down.  Fortunately, we had with us the outstanding Nova Scotia Travel Guide — Robin looked up a B&B in New Glasgow and, thankfully, they had a room.

So we are safe and sound for another night and looking forward to getting onto Cape Breton Island tomorrow!