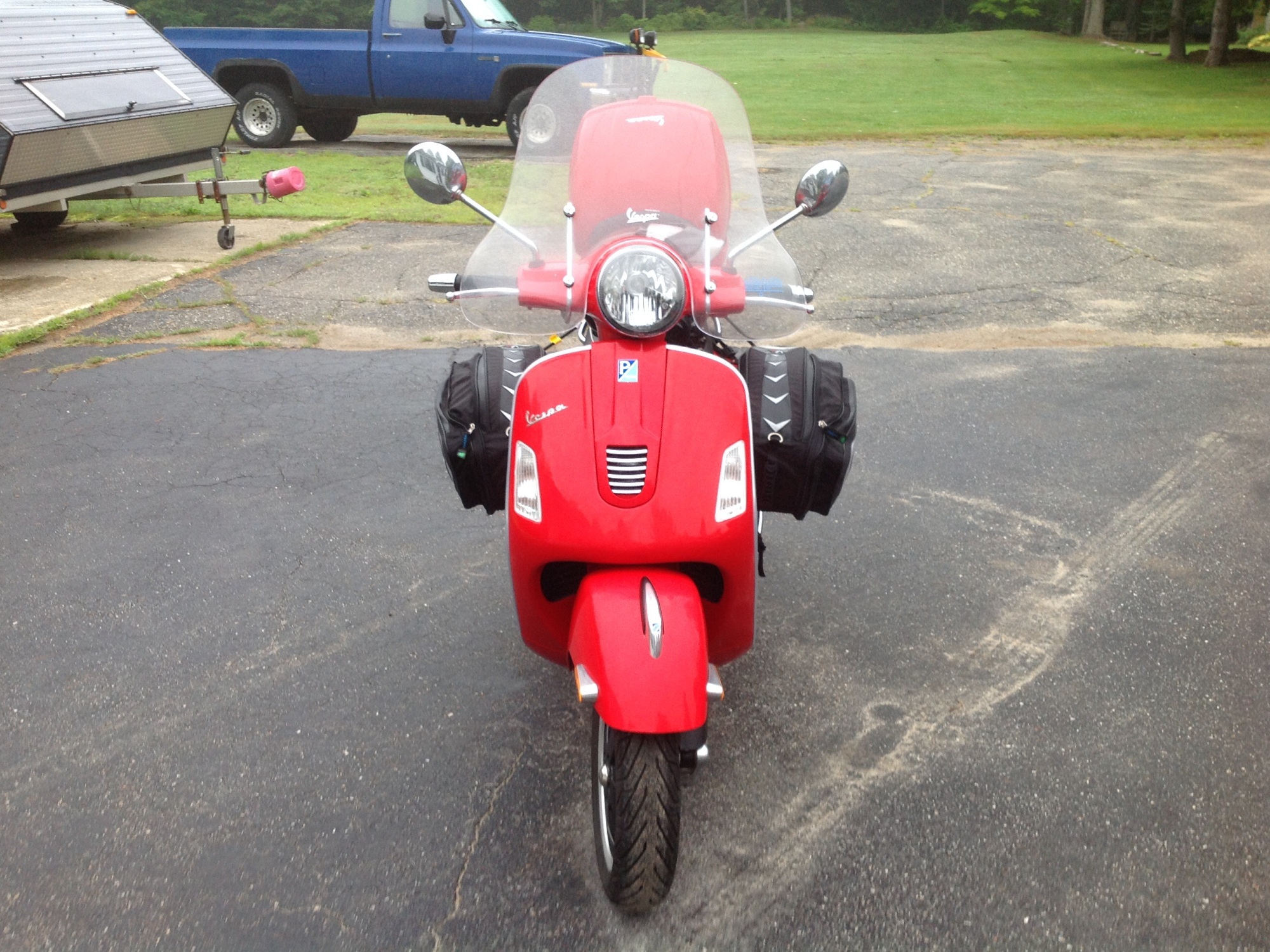 Today Francis and I rode across Streaked Mountain into South Paris, then headed west to Bethel, where we picked up US2 West and rode it across New Hampshire and Vermont.  ME-117 from Turner to South Paris is an excellent road for motorbiking, with a relatively new surface and lots of curves as it climbs steadily over Streaked Mountain and then descends into the Oxford Hills region.

ME-26 is also a good road, passing through Bryant Pond (home of the last crank telephone in America — there’s a big crank phone on the town square) and Locke Mills (home to ski area Mt. Abrams) into Bethel, a historic old western Maine village.  US 2  is one of the major east-west routes across New Hampshire and Vermont and varies from narrow, 2-lane, 40MPH road (slower in the many towns which it connects) to a 4-lane divided highway running at 60MPH.  It IS quite scenic in spots as it traverses the mountains of northern New England; although we did not stop often for pictures in our haste to make time.

Actually, I should say MY haste to make time, because making time is never a concern for Francis.  He IS doing better at traveling close to the speed limit, but he appears to have a low tolerance for sitting on the bike; every 30-40 minutes he finds an excuse to stop for something.  As a result we averaged about 25 miles per hour on the day, which makes our 200 miles even more of an accomplishment than it normally would be.

Here are the bikes just prior to departure.  I need to say a bit about the luggage, as it is the first time I have used it and so far have found it to be excellent.  You can see on the Vespa two pannieres made by Oxford, their “X50” model.  Last year, when Robin and I took this trip across northern New England, I used a small suitcase that she had purchased for the purpose.  It worked OK, except that because it was strapped on the seat behind me (passenger style), it not only poked me in the back the whole trip, but also had to be untied and re-tied every time I needed gas (since the fuel fill is under the seat) — very tedious and time-consuming.

So, this Christmas, Robin got me the Oxford X50s which hang over the bike via straps placed underneath the seat, and then tie on to the crash bars.  No hassle whatsoever, completely out of the way for fueling.  The only minor concern is that they do bump the backs of my legs when stopping, but I quickly adjusted to this and it was never an issue.  Better still, these pannieres come with waterproof inner bags, which worked like a charm in the downpour we waited out (about an hour) in Montpelier.  Francis, meanwhile, has his socks draped all over the motel room in hopes that they will be dry tomorrow morning.

Anyway, after 200 miles, a 6AM alarm and a 7:30AM departure, we arrived in South Burlington, VT at about 5:30PM and I was done — I stopped at the first lodging we found, the curiously-named Ho-Hum Motel.

Nothing fancy, but it meets the need.  My guess is that we have another 150 miles to our destination in Massena, NY tomorrow.  Francis assures me that there will be lots of photos to be taken there, as Massena is located on the St. Lawrence Seaway.  The goal is Massena tomorrow, stay the night there and then head back east toward home the next day.  I’ll post again from Massena!

2 thoughts on “Across to Vermont”