The plan today was to sleep in, figure out how to use the toaster oven I bought for the Little Guy, enjoy a leisurely breakfast and then, sometime around noon, go play golf at the Bethel Inn.  Thanks to my grandmother who introduced me to the game as a boy, I am an avid if but marginally competent golfer and I play every chance I can; sadly, my youth baseball career created bad golf swing habits that I am still struggling to overcome fifty years later.  But no matter — it’s the being out there and challenging the course that I enjoy along with the occasional good shot.

So I called the Bethel Inn pro shop and got a tee time for 12:30PM.  After breakfast, however (the toaster oven worked just fine, by the way!), I used the Little Guy’s shower for the first time and was concerned to note that, while it did not leak at all (this had apparently been an issue with early Little Guys, as the water leaked out of the shower stall and onto the floor), neither did it drain particularly well.  Then, I washed the breakfast dishes and found the same problem with the kitchen sink — standing water in both.  I reasoned that either there was a clog in the plumbing somewhere, or the gray water tank was full.  Testing the latter premise, I powered on the tank monitoring system and saw that the tank was registering just half full.  Oh well — my tee time beckoned and I figured that whatever was going on, it would keep until later this afternoon.

The Bethel Inn is an old upscale hotel, restaurant and function center in the foothills of western Maine, and is the anchor business in the town of Bethel.  The golf course was originally built in 1913 as a nine-hole layout but was updated in 1988 by Geoffrey Cornish to include eighteen championship holes with five tee boxes to accommodate every level of player. 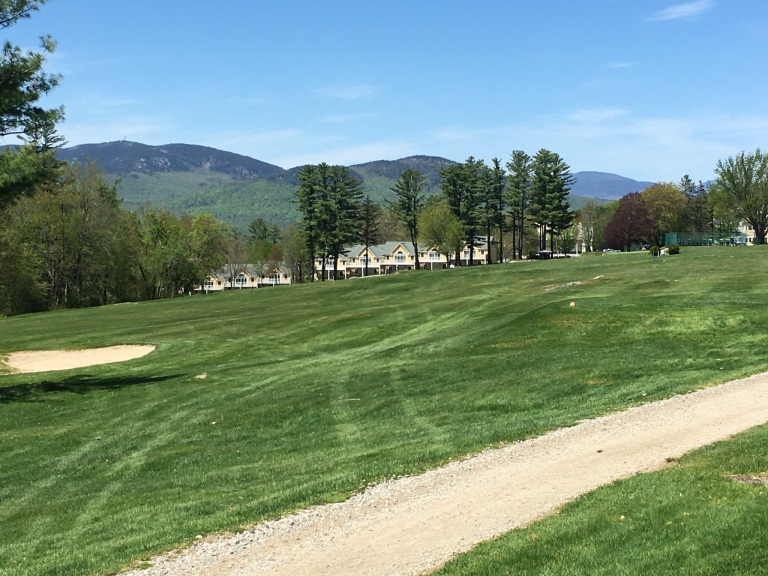 Pleasant mountain views like those above frame many of the holes.  I found the course itself to be very playable with only a few narrow fairways.  It was not, however, in particularly good shape, with many bare spots on the greens and the tee boxes, and the fairways cut quite high.  I asked the ranger about this (for those readers without a golfing background, high-end courses employ a “ranger” whose job it is to keep play moving and enforce course rules) and he said that the course experienced several sleet and ice events in April after the greens were cleared of snow — in fact, he said it was so bad that many of the greens died back to bare dirt.  So the course is clearly coming back, but there are still dead spots and the grass on the greens was cut quite high as a result, causing many putts to be left short.

Incidentally, the yellow buildings you see in the photos above are condos and rental units, and can be rented for golf vacations in the summer or ski vacations in the winter (Sunday River Ski area is close by).  They intrude only on the first and last holes of each nine and so do not mar the golfing experience in any way.  I enjoyed the course a great deal and certainly consider it one of the better I have played, though not of the caliber of top-shelf courses like nearby Sunday River or Sugarloaf.  There is a scenic and pleasant brook that runs through the back nine: 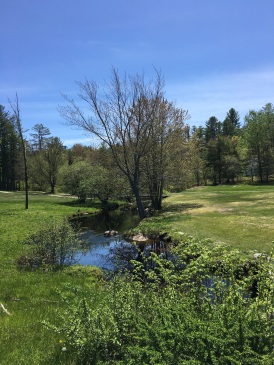 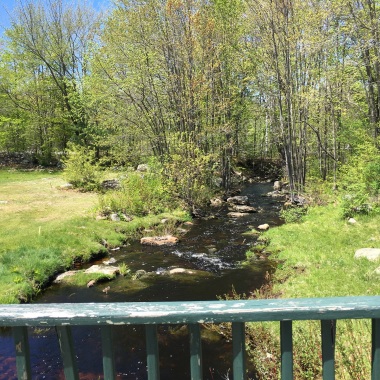 Having completed my round and upon returning to the Little Guy four hours later, I found water still standing in the sink and the shower, so I decided I would try to empty the holding tanks today instead of (as I had originally planned) before leaving tomorrow.  For the uninitiated, RVs have three holding tanks: one for fresh water (for drinking, cooking and washing), one for gray water (that which drains out of the sink and shower), and one for black water (what you get when you flush the toilet).  The gray and black tanks are both piped to a connection valve at the driver side of the RV (opposite the door); one of the first RV purchases I made was for a so-called “sewer hose”, which connects to this valve on the RV and then to the dump station on the other.  Consider the photo below: 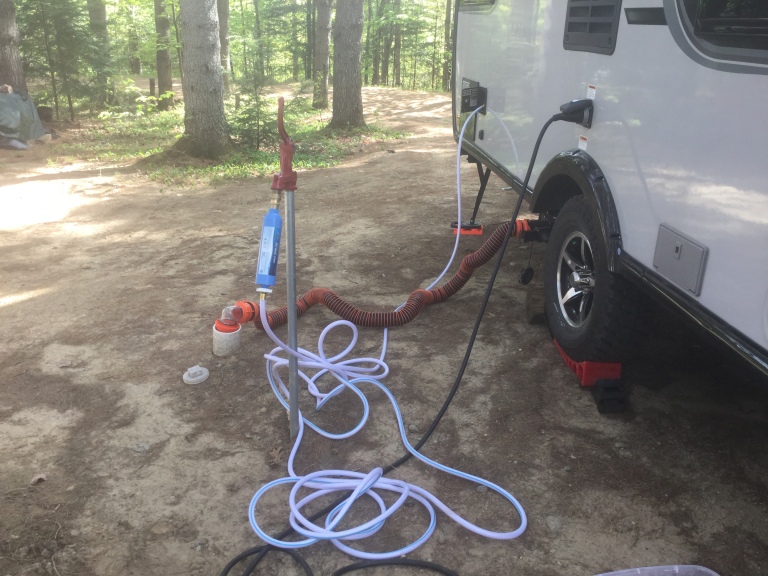 The black cord is the electric power cord; the white hose is the fresh water hose, pumping fresh water into the RV from the orange-handled spigot; and the black-and-orange hose is the sewer hose, connecting the RV sewer valve to the dump station in the ground.

I had been dreading the emptying of the tanks as I had never done it, and the thought of handling (and worse, spilling!) raw sewage was extremely daunting to me.  However, I quickly figured out how to connect the hose, and so all that was left to do was to pull the black tank lever and see what happened.  I was astonished at the pressure of the tank flush and raced over to the dump station connection to hold it in place (with rubber-gloved hands, of course!), but that was the only concern.  The tank soon emptied, after which I closed the black tank lever and pulled the gray tank lever.  Again, lots of pressure but the gray water flushed out the hose and soon only clear water was running through it.  I decided to leave the hose in place overnight so I could empty the tanks again tomorrow morning before leaving; that way I know I will start my next trip with empty tanks, thus giving me maximum time to camp before needing to dump them again.

Tonight I will make supper (hopefully without setting off the smoke alarm), build a fire, and read some more of Robin’s journals.  As I cleaned out her office eighteen months ago, I found a number of her journals and decided to keep them; but until now I have been unable to look at them.  I brought them on this trip thinking it would be a good time, being alone and all, to read them uninterrupted.  I read one last night and was amazed at how hard she worked to understand both relationships and life.  She didn’t just let life happen to her, she had goals — goals for understanding marriages (the focus of her career) and goals for her own personal spiritual development; and while I had some sense that this was the case, I never knew how much thought she had given it and how much effort she had spent to understand.  Once again she is providing an example for me.

Anyway, barring something unexpectedly catastrophic happening tonight, I count this maiden voyage a success.  All the systems work on the Little Guy, all the appliances work, and I managed to figure out how to do whatever needed to be done in order to stay comfortably and safely in this little trailer.  I feel more confident that I can get it hooked back up tomorrow and delivered safely home.  And I enjoyed playing a new golf course, too!  I hope everyone’s Memorial Day 2020 weekend was as enjoyable as mine. 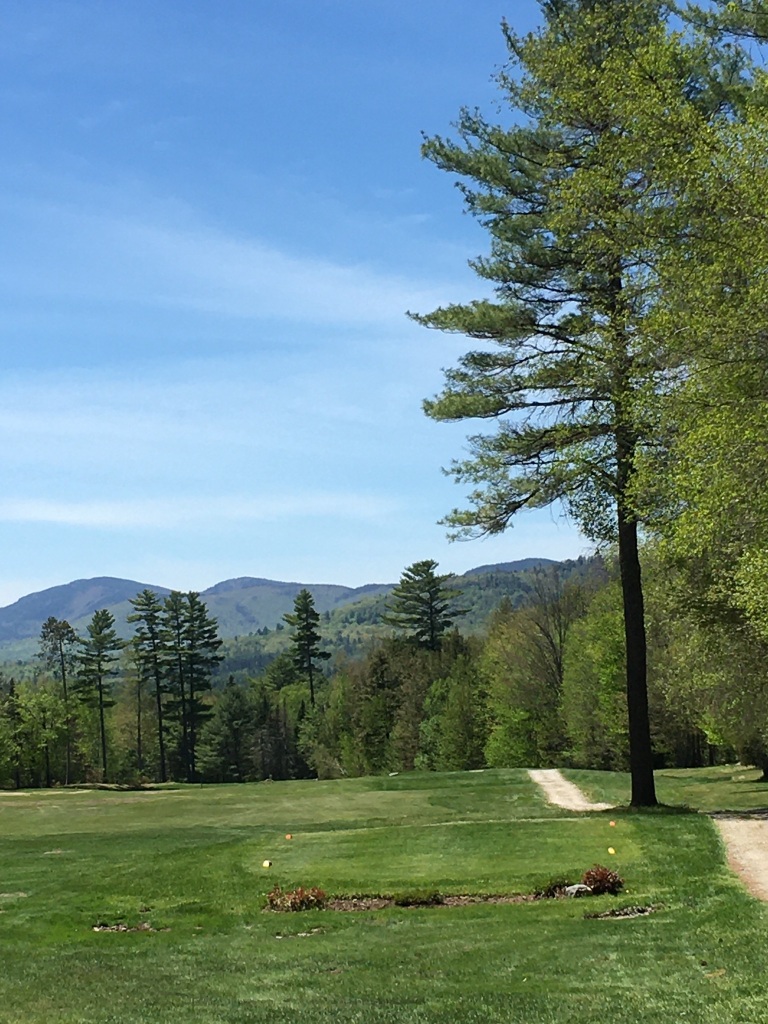